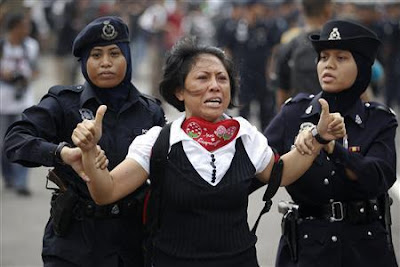 POCKETS of unruly Bersih protestors continued to challenge the police even after the end of the rally for free and fair elections that organisers have admitted to have lost control of.

About 1,000-odd protestors spread along Jalan Tun Perak and Jalan Raja Laut continued to defy police orders even after the rally ended at 4pm, taunting and jeering the men in blue.

Things took a violent turn when a police officer was seen dragging a man across Jalan Tun Perak, which resulted in Bersih supporters attacking the police with broken bottles, mineral water bottles and broken concrete slabs.

Amid the chaos, rumours are being spread that at least four protesters have died in the melee, with claims that one was even shot dead, further fuelling the crowd’s anger.

It was also reported that a delegation of police vehicles ferrying KL Mayor Tan Sri Ahmad Fuad Ismail in one of their cars was forced to make a U-turn near Masjid Jamek when met with a hostile reception from protestors.

They threw shoes and broken concrete slabs at them, smashing the windows of two cars in the process.

A Pakatan Rakyat (PR) lawmaker has privately admitted that the violence was far cry from last year’s rally, and that attempts at 'crowd control' were bad.

“The order to disperse and go home has been given, please do so. The Pakatan leadership has said it is over. If you all still do this you suffer your own consequences,” a PAS Unit Amal officer was heard telling off some Bersih rally participants.

As at 7pm, police are still firing tear gas in efforts to stop Bersih protestors from regrouping.

Bersih has distanced itself from the violence, with steering committee member Dr Wong Chin Huat saying that the attacks on the police were not the work of Bersih.

“I believe there were agent provocateurs who attacked the police.

“And I declare, this is not the work of Bersih. We denounce it; if they were Bersih protestors they would have listened to us,” he told The Malaysian Insider.

Scores of police officers were seen making sporadic arrests, as well as resorting to physical means in efforts to stop Bersih protestors.

Minutes later, the man was detained after being chased by the police into a restaurant.
Posted by sabahkini.net at 22:41