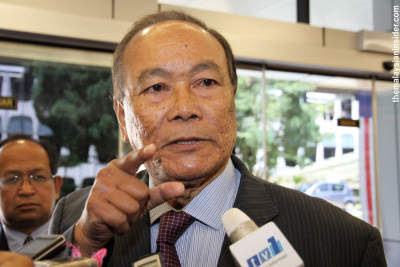 POINT.....Tunku Abdul Aziz makes a point why he is against the Bersih 3.0 rally to reporters in Kuala Lumpur on April 26, 2012.

VETERAN DAP leader, Senator Tunku Abdul Aziz appeared today to break ranks with his party leadership over its backing of Bersih 3.0 this Saturday, claiming the event encourages Malaysians to 'break the law'.

“My opposition to this kind of demonstration is- we are encouraging people to break the law and we are supposed to be lawmakers. I think there is a contradiction here,” he said.

The DAP vice-chairman, who is among the few Malays in the Chinese-dominated party, had declared his stand this afternoon at the Dewan Negara sitting here during the ongoing debate on the royal address.

Speaking to reporters at the Parliament lobby later, Tunku noted that this was his personal stand on the issue, which he has conveyed to his colleagues in the DAP leadership.

“I am opposed to this on a personal basis as a matter of personal principle.... what the party wants to do, that’s the party’s decision,” he said.

The senior leader noted that although most street demonstrations start off with peaceful intentions, they often turn out to be violent and chaotic.

“Now, when something happens, who is going to take responsibility?

“The tendency is to blame the authorities and I think this is not fair,” he said.

Tunku Abdul Aziz labelled election watchdog Bersih “irresponsible” for refusing to budge from its plan to use Dataran Merdeka for the “sit-in” protest, pointing out that the authorities have already offered alternative venues.

“The whole idea is to protest. Does it matter where the protesting is done?” he pointed out.

But he also stressed that he was in full support of an individual’s constitutional right to assembly, provided that this right is exercised within the confines of the law.

He said the police were a legally established authority and Bersih 3.0’s organisers should accept their advice on the suitable venue for the event.

“The law provides for us to assemble but what I am saying is — who is responsible for security in our country? The police.

“Whatever we do, we have to consult the police. If they advise us; maybe you have to change your route, maybe you should do it somewhere else, that’s what we should do, because to go against the police... they are an established legal authority,” he said.

Asked for alternative ways for Bersih to air its grouses over the country’s failure to reform the polls process, Tunku Abdul Aziz said: “There must be other ways without getting on the streets.”

He pointed out that those who oppose to the country’s laws could use Parliament as their avenue to amend the legislation instead of taking to the streets in a show of force.

“We may be part of any party or organisation but that does not mean we abandon our conscience.

“All of us should never do that. Some things we support, other things we must oppose,” he said.

Bersih has clashed with the authorities on its plan to use Dataran Merdeka for its rally this Saturday.

Both the Home Ministry and KL City Hall have offered alternative venues, including Stadium Merdeka, which was Bersih’s choice of venue last year, but the election watchdog has rejected the suggestion, saying it had come at too short a notice.
Posted by sabahkini.net at 20:18