“UNITED we stand; divided we fall.” That was the message which Chief Minister Musa Aman drove home to more than 1,000 leaders and members of eight Barisan Nasional coalition parties in Sabah on April 26.

Musa knows what he is up against in a general election that could be as early as late May or mid June. But he is undaunted. “We want an even bigger victory this time,” he said as he launched the BN election task force at the Umno building in Kota Kinabalu.

Prime Minister Najib Razak does not have to call an election until March next year. But he has hinted that he would call one very soon. With 25 out of 222 parliamentary seats, Sabah has been a BN bastion of political power.

In the 2008 election when the BN lost its two-thirds majority for the first time in 39 years, Sabah under Musa delivered 24 seats. It lost one to the national opposition Democratic Action Party (DAP) but lost two more when the Sabah Progressive Party (SAPP) left the BN in September 2008.

In the state assembly, the BN also lost only one seat to the DAP. But SAPP took two with it when it left the coalition. 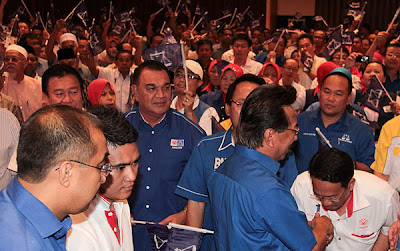 PEOPLE.....Go to the people, Musa tells BN leaders and members.

Musa said the BN would face a bigger electoral challenge from a vociferous opposition that would stop at nothing to win power. But he is confident of a resounding victory.

He is mobilizing his task force in seven geographical areas that cover the 25 parliamentary constituencies. Party leaders and members will go to the people to explain what his government has been doing for them, how they have benefitted from the government socio-economic programmes and what is in store for them in the future.

This year, Sabah is spending a record 4 billion ringgit ($1.3 billion) on socio-economic development.

Musa is not resting on his laurels, but he will let his government track record speaks for him. Ambrin Buang, Malaysia’s no-nonsense auditor-general, has all praise for Sabah’s sterling financial management for 11 straight years. Sabah is cash-rich and has reserves of more than 3 billion ringgit. It is a good paymaster; debts are paid on time. The Ratings Agency of Malaysia (RAM) has given Sabah’s finances a triple-A.

Musa said BN leaders and members must explain this to the people and what the government has done for them so that they would not fall prey to opposition propaganda. (Insight Sabah)