ALL SABAH POLITICIANS ARE FROGS? 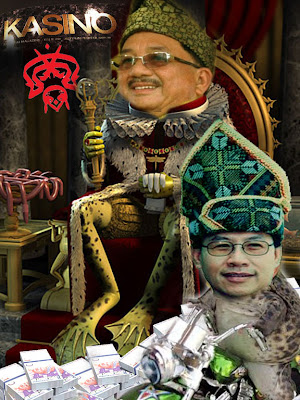 KENINGAU: State Reform Party (Star) Chairman for Sabah, Dr Jeffrey Kitingan, said all Sabah politicians are 'frogs' and not just him, if party-hopping is what the term means.

"We are all frogs but I have been changing parties in order to look for solutions for Sabah and not for my own interest," he claimed, at the Star Bingkor launch, recently.

He said almost all Sabah politicians had one way or another changed political parties in their career and claimed that this included Chief Minister Datuk Seri Musa Aman and his brother Tan Sri Joseph Pairin Kitingan.

He noted that Musa left Usno for Umno while Pairin left Berjaya and Pasok to start Parti Bersatu Sabah (PBS).

Generally, he said if the politicians stopped hopping, it is because they got positions and comforts for themselves, some even sacrificing their struggle for the rakyat.

He said these selfish leaders would stick with the current ruling Umno as long as the party is in government or as long as they have their own position, but they would jump to other parties if Umno is no longer ruling.

"They are actually 'fat frogs' now, so they don't jump anymore..." he said explaining his party-hopping, which he claimed had been used to discredit him for a long time.

He also defended his party-jumping as merely seeking ways to resolve perennial problems in Sabah which he claimed the ruling leaders failed to resolve.

Jeffrey also accused Sabah BN component parties of being traitors to Sabahans and puppets of peninsula-based Umno and that they have no choice but to sing Umno songs, likening them to "buffaloes led by their nose."

"We in Star have our 'perjuangan' (struggle), but they have lost theirs.

Chiding those who ridiculed his move from party to party, Jeffrey said none of the parties he joined would carry his struggle to regain the independence of Sabah.

He also cautioned Sabahans of getting "out of the frying pan into a fire" explaining that those who are joining another peninsula-based party like PKR would only weaken Sabah but strengthen Malaya's hegemony over Sabah, and things might just repeat for the people here once more.

"But don't be disheartened as the coming election is another opportunity God gave us to change the situation. As long as we are alive, we still have hope, and it is this hope that made the people support Star," he said.

He also claimed that in a mere six months of its existence in Sabah, Star has garnered 175,000 members.

Jeffrey also announced that if Star formed the next state government, it would double the monthly welfare aid to all qualified senior citizens from RM300 to RM600.

He also announced that RM500 would be allocated as savings account for each Sabahan baby born so that the child would have sufficient savings when he or she turns 18.

At the function, a group of children carried a symbolic plaque of Star's seven-point Borneo Agenda and presented it to Jeffrey.

Jeffrey was also proclaimed by the organiser as the "Father of (the) Struggle to Reclaim Sabah Rights".