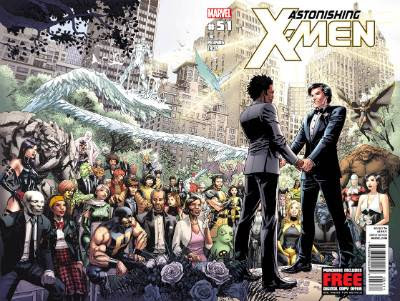 A SAME-SEX couple tied the knot at a comic-book store in New York last week to celebrate the first gay nuptials in the superhero world in a new edition from Marvel Comics. Midtown Comics delayed the opening of its downtown store for the wedding of Scott Everhart, a healthcare site manager from Columbus, Ohio, and 33-year-old architect Jason Welker.

The real-life nuptials, complete with a band and balloons, coincided with the comic-book union of Jean-Paul Beaubier, aka Northstar, who can move and fly at superhuman speed, and his long-term partner, Kyle, in the series Astonishing X-Men #51. The comic-book characters have been a couple since 2009.

"For us, just personally, this was a fun way to do it," said Scott, 39, who added that comic books have played a large part in his relationship with Jason.

"I've read comics since I was 18. When Jason and I met, one of our first dates was to one of our local comic-book shops to see what he thought of that world, since I'm invested in reading and collecting comics." 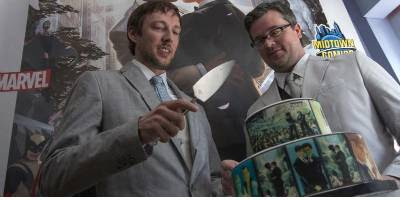 CUT....Jason and Scott prepare to cut a cake after exchanging vows.

The real and comic-book marriages mark the one-year anniversary of the legalisation of gay marriage in New York. They also follow President Barack Obama's announcement pledging support for gay marriage. An estimated 63,000 gay and lesbian couples are expected to marry in New York within the first three years of the law passing.

Scott and Jason had talked about marriage for some time and decided to take the plunge after seeing a post online looking for couples to take part in the event with Marvel Comics. The couple also wanted to send a message to gay and lesbian young people across the US.

"To me it showed the youth that there are people out there like them, maybe in a small town, that those kids could identify with, not only us but with the comic-book characters," said Scott during his first visit to New York. "The X-Men world, that universe that Marvel has created, shows all types, whether they are gay, straight or bisexual, whatever their colour or their orientation." (Reuters)
Posted by sabahkini.net at 10:36