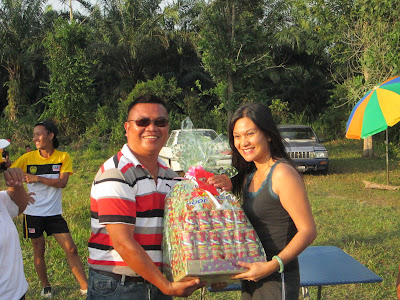 KENINGAU :Round 2 of the Borneo Youth Premier League (BYPL) Annual 2012 Football Tournament  ended Sunday after a three weekend showdown with Lingkudau FC of Keningau as Champions and Bayangan FC as runner-up.

Champion of Round1, Belia Borneo Komiti FC from Bingkor will face off against Champion of Round 2, Lingkudau FC of Keningau, in the finals next week to determine the 2012 BYPL Tournament Champion, who will then represent BYPL in all organised friendlies and tournaments for the rest of the year, the first of which is expected to be in September against KK Expats FC, an amateur team formed by expatriate, Gareth Pearson, and former Rhino Golden Boot Champion, Scott Ollerenshaw.

BYPL attracted 16 teams to the tournament this year, most of which are newly formed youth clubs. Together with last year’s tournament, the BYPL has seen the growth and participation of a total of 47 amateur football rural teams from the Sabah interior, believed to be the fastest growing football amateur league in the State of Sabah.

“No offence to anyone,” said Nilakrisna James, “but judging from the performance of the professional teams in Sabah football lately, I think our kampung BYPL boys will give the pros a run for their money and our Champs are more than willing to engage in a friendly to determine the meaning of “quality” football. We’d like to meet hawks, rhinos, lions and anyone else who needs some serious exercise because the teams in this league have expressed confidence that they will win.”

She added, “This tournament, for the second year running, has seen more great games on the pitch than I have seen in a very long time. They’re fit because their jobs demand daily physical exercise and they have to work really hard to put food on their table every day.

That kind of discipline has seen some fantastic individual players on the field and these are the sort of guys who should be representing Sabah professionally. It’s a shame they remain unknown and there are no talent scouts to pick them up from football obscurity. So we’re extending an invitation to the pros and officials who may need to identify new talents to watch the finals in Keningau next week and talk to Juse on 01119034149. You’ll need to bring your own stools and umbrellas.”

The ten teams in Round 2 were Bungaraya FC from Apin Apin; Lingkudau FC from Keningau; Bokilo FC from Lotong of Tambunan; Relax Team FC from Biah of Sook; Real Murcia FC from Takad of Apin Apin; DD FC of Apin Apin; Merampong FC of Merampong; Mafua United FC of Sook; Rumandawie FC of Apin Apin and Bayangan FC of Keningau.
Posted by sabahkini.net at 12:31