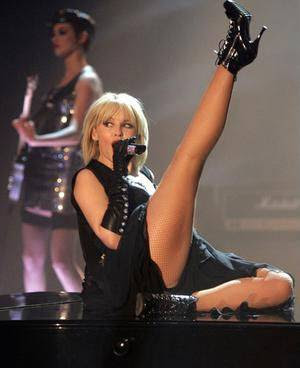 SHARE....Kylie has had her share of wow moments on stage.

EVERYONE knows Kylie is a big Madonna fan, but she's not pulling out her pom-poms over Madge's cheerleader uniform.

She's given the thumbs-down to Madonna's decision to dress up like a high-school cheerleader for her new concert tour. The topic of Madge's stage costume was brought up by Joan Rivers when Kylie was a guest critic on Joan's hit show on E!, Fashion Police.

Acid-tongued Joan, 79, didn't mince words over the Arianne Phillips-designed rah-rah costume. "Madonna as a cheerleader? What school does she go to, Our Lady Of Osteoporosis?" she zinged. "She looks like she flunked 10th grade 48 times!" Joan then turned to Kylie for her opinion and Kylie joined in the dissing with a disapproving, "No. Just no."

Of course, the policing wouldn't have been complete without Joan mentioning Madge's latest stunt—exposing her breast at a concert in Istanbul. Even Kylie, no stranger to raising eyebrows with her own sizzling stage antics, was left to figure out the 53-year-old pop star's reasons.

"Was she caught up in the moment? Was it premeditated? Who knows. I think it's got people more perplexed than excited by it," said the 44-year-old Aussie.

But don't get the wrong idea—Kylie still loves Madonna. When comparisons between the two were brought up, Kylie quipped: "Is that because we're the two oldest ones? Competition, I don't know. But I grew up such a fan of her. I don't even care how we're in the same sentence, it's quite good for me." (Digital Spy/Daily Mail)
Posted by sabahkini.net at 10:21