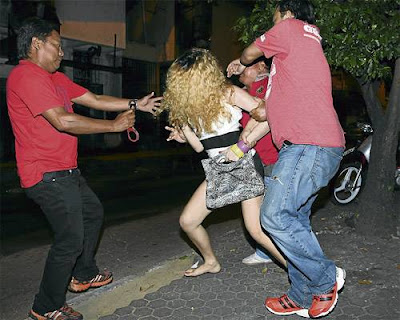 KOTA KINABALU: Six transvestites (pondans) looking for clients were apprehended in an integrated operation here during the wee hours, Thursday. Others who realised the presence of authorities immediately kicked off their shoes and fled on barefoot to avoid being caught.

A total of 57 personnel from six government agencies like police, Sabah Islamic Affairs Department (Jheains), City Hall, Immigration Department, National Registration Department (NRD) and Welfare Department were involved in the joint operation from 1am until 4.30am.

ASP Mahyuddin Kadijo who led the operation said all the transvestites or "Mak Nyah" were arrested in several locations believed to be their favourite hangouts to offer sexual services like Kg Air, Asia City and Jalan Pantai.

"All of them aged between 18 and 28 were brought to the Jheains office in Wisma Muis for further action.

"They were detained under Syariah provisions for dressing and behaving like women.