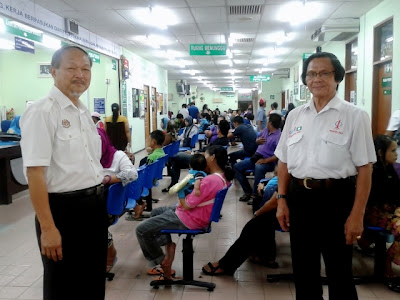 THE ISSUE on whether the Putatan Clinic can be upgraded into a district hospital was brought up in Parliament by the Kota Kinabalu Member of Parliament Hiew King Cheu on 19th June, 2012.

The reply from the Ministry of Health (MOH) indicated that the Putatan Clinic is serving as a supportive role in terms of monitoring the spread and control of diseases besides backing up the work load of the Kota Kinabalu Hospitals. It has the role in taking care the health of the Putatan people.

The Putatan Clinic is a Class 3 clinic, started operation in 2004 and it is close to QEH 1 which is 7km away with 589 beds, QEH 2 12km away with 386 beds, and the Women and Children Hospital in Likas with 504 beds which is 20km from the Putatan Clinic. The ambulance will only take 15 to 25 minutes to reach the KK hospitals. The Putatan Clinic has two ambulances to transfer the critical and accident patients.

The Putatan Clinic is no need to be upgraded to a District Hospital as yet, and this clinic will still act as a 'gate keeper' on health problem. The clinic has the X-ray facility, pharmacy, test laboratory, dental clinic, emergency unit, dielectric, food consulting, physio-therapy and other important services.

All patients are attended to fully by everyday by the 10 doctors in the clinic, sometimes is up to 750 patients per day. The time of waiting is about 30 to 45 minutes during peak hours. Further improvement involves the extended hours up to 24 hours in the emergency ward, and for low risk giving birth is also for 24 hours.

On another question raised on why a retired Health Department Director can be working in the Putatan Clinic, the MOF replied that the retired health director is engaged under a contract and placed to serve as a medical officer (doctor) in the Putatan Clinic with Grade UD53 which is  a much lower grade than the grade held by the retired director before. The given job is to look after patients in the clinic only.