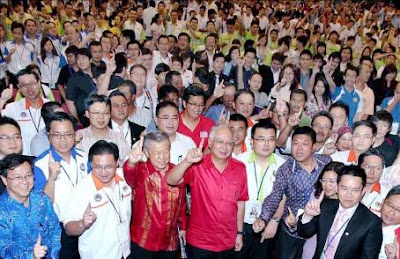 PENDATANG....Najib urged the Chinese not to take the “pendatang” slur too personally.

KUALA LUMPUR, June 24 — Malaysian Chinese are not “pendatang (immigrants)” and those who labelled the community as such were “lunatics”, Datuk Seri Najib Razak said today in an apparent attempt to court the group.

The prime minister said this in reply to a comment by a participant in a dialogue session with Chinese youths today, where it was noted that not all government leaders had followed Najib’s 1 Malaysia policy, with some calling the Chinese “pendatang”.

“What’s important is that Malaysia’s leaders do not consider [Malaysian Chinese] as pendatang,” Najib said.

“Even in Malaysia, we have one or two lunatics; don’t take it too personally,” he said, referring to those who had hurled the word against the Chinese.

He also assured the crowd that studying in Chinese schools does not make them less Malaysian.

The poll found that Chinese support for the PM had dropped 19 points from 56 per cent in February. Only 37 per cent from this segment polled now supported Najib — the lowest of the country’s various racial groupings.

Despite the continued rebuff, Najib has continued efforts to woo the community in the build-up to what is expected to be the most hotly contested general election in the country’s history.

He has, however, conceded that it will be a “gargantuan task” to regain Chinese support for Barisan Nasional.
Posted by sabahkini.net at 09:05