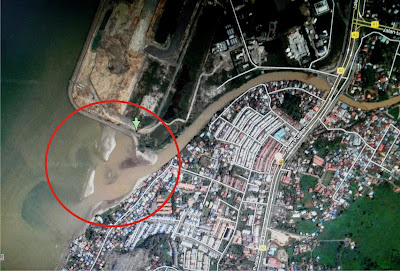 THE MANY river mouths in Sabah are urgently needed clearing, strengthening and deepening in order to allow a swift flow of the flood water to be quickly discharged into the sea to avoid flooding of the inland areas.

The particular case is at the Petagas River, where its river mouth is now seriously silted up and causing a blockage of the flow of river water into the sea (see satellite photo attached).

The KK MP Hiew King Cheu has brought this matter up in the Parliament recently on the 14th of June, 2012, and he asked the Minister of Natural Resources and Environment on whether there is a plan to clear the river mouths of all blockages and deepening the river in Sabah to avoid flood.

The reply said there is a preliminary plan to cope with the situation of floods at the river mouth of the Petagas River near the KKIA at the way up to the Sungai Moyog, and shall include the one in Putatan River. The plan was ready in 2011. The study on this program included the deepening, and clearing of all blockages of both the locations.

This will solve the problems of flooding in the areas. The details of the work has been drawn up in this year and hopefully it shall be completed in the middle of 2013 whereby the allocation can be applied under the Third Rolling Plan, 2013 – 2014 under the 10th Malaysia Plan (RMKe-10).

MP Hiew said judging on the slow process on applying for the allocation to be made to start on the work, and this surely indicates the work will not start in 2013 or not even 2014. This signifies the people are going to suffer from many more floods in the near future when the rainy seasons return.

From the serious silting up of the river mouth in Putatan and Petagas, we can see that the flow of river water into the sea is blocked by the sand dunes or sand bars. If this is not cleared or dredged away, the flow will be restricted and caused back wash or pile-up in the up river.

It is urgent that the authorities have to come in to carry out the deepening work as soon as possible and should start right away. They can wait but the people here cannot wait. In fact, the many river mouths in Sabah also faced the same problems. On the other hand, if Sarawak can have the billions of Ringgits allocation to clean up their river mouth, why can’t Sabah do the same and be given the money to start the work immediately?

Sabahan is again being sidelined by the BN government and this is a typical example to show that we are always on the last of the long queue of fund allocation from the Federal Government. Just to remind you that the 10th Malaysia Plan is more than half way through, and will this be done during the third rolling plan? We will have to see what will happen then?
Posted by sabahkini.net at 23:53