WELFARE DEPARTMENT BUILDING NOT BEING USED 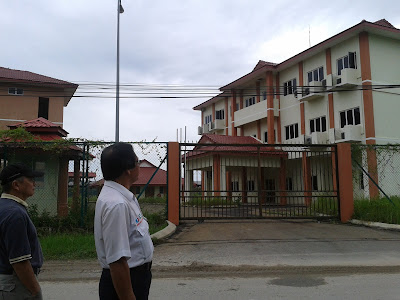 MEMBER OF PARLIAMENT Kota Kinabalu Hiew King Cheu asked the Ministry of Women, Family and community Department to state why the new building under the jurisdiction of Welfare Department at Mile 7, Jalan Tuaran not being used and the old dilapidated building not torn down and clear the place.

The replied of the Minster is the new building of the Welfare Department at Mile 7, Jalan Tuaran originally being built as Sabah Boys House. The new building was completed on 23.08.2011.

However, on 26.06.2011 the scope of the usage of the building has been change to Taman Seri  Puteri like the building of Taman Seri Puteri at Menggetal which the scope of usage has been changed to Desa Bina Diri Sabah due to extended and usage of Akta Orang-Orang Papa 1977 in Sabah which took effect on 01.07.2011 that required Welfare Department to build a place to care and rehabilitate the beggars and homeless.

With the change of scope of usage of the building Welfare Department at Jalan Tuaran the Ministry of Women, Family and Community Development has to gazette the said complex as well as to change the equipment and furniture which has to be purchased.  The Ministry has obtained the approval from Economic Planning Unit of Prime Minister Department for the scope of the changes, the purchase of the equipment and furniture.

The Ministry is given to understand that the site is to be used to built Kompleks Sehenti Orang Kurang Upaya Kota Kinabalu in the 10th Malaysia Plan. Besides, it’s reliably to learn that Jabatan Perhkimatan Kebajikan Am Sabah will carry out the necessary job to clean the area in stages until the proposed building can be implemented.

The changes of the usage of the building have to involve a lot of money as the architect and consultant has to be engaged to make the necessary changes to suit for the new purpose.  The equipment and furniture has also to be modified for the same reason.   So how much funds has to be spent on all these changes and who ever made such decision.

The people would like to know how this sort of action can happened as it is  felt that the addition funds can be utilized to make good of all the bad road, bridges and blocked drain in Sabah.

It is also interesting to know how much is the cost and the additional funds needed to make the necessary changed of usage.
Posted by sabahkini.net at 01:08