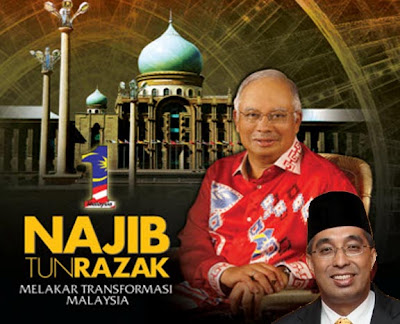 He said Najib, who brought about transformation and changes to the country and the people, proved himself as the problem-solver to the various problems facing the people in the country.

"Our Prime Minister understands economics and prepare to make tough decisions for the good of the people and the country.

"He (Najib) is addressing issues confronted by all sectors of society and his politics is economics and that's why we need him to continue as Prime Minister and give him strong mandate in the upcoming general election," he said in his speech during a meeting with Kota Belud grassroots women leaders, here today.

"Anwar plays on issues and sentiment but no solutions to resolve problems. He encourages confrontation and defiance of public order.

"we want a peaceful nation and we manage our differences in our own way and political future," he said.

On Star Sabah Chairman, Datuk Dr Jeffrey Kitingan's claim in the local newspapers today that state Umno leaders were proxies and stooges of Kuala Lumpur, Salleh shrugged off the remarks, saying it was merely a political gimmick and purely to cover up the issue of frogging.

Salleh said instead Sabah Umno leaders, particularly Chief Minister Datuk Seri Musa Aman had continuously championed the cause of the people of Sabah through consultation approaches.

"Many of the pressing issues facing the people of Sabah have been addressed and with state Umno leaders being part of Umno, a national party which is the backbone of Barisan Nasional (BN) government, we will be more effective and successful at solving problems," he said.

He said these included the setting up a Royal Commission of Inquiry (RCI) to investigate problems related to illegal immigrants in Sabah and the marked increase of Sabahans heading Federal government departments and agencies in the state.

On the other hand, Salleh said Dr Jeffrey's approach towards the Federal government was more confrontational, theoritical and rhetoric. (Bernama)