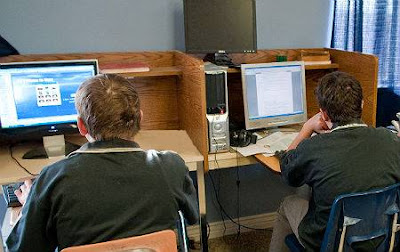 At Oxbow, the students are given a tough regime of daily chores, hours of therapy, lie detector tests, and all phones and personal computers are banned at the school. Each day begins at 6am. And although there are full-time catering staffs, the students have to do their own washing and laundry.

In the afternoon, the kids are bussed to a second campus for "holistic therapy" classes, which includes art, music and horsemanship. (We guess they've never seen Peter Shaffer's play, Equus.) There are "qualified high school teachers" on staff and the kids do the same lessons as they would in a regular school.

Every teenager has access to a computer for their schoolwork, which only allows them to open encyclopaedia pages. A school day ends at 9pm and the teens have one hour to lounge in a communal meeting room. And like ordinary schools, there’s homework.

The kids are also given therapy assignments to help them address their sexual issues. Parents are required to join their kids at one therapy session a week, via Skype, and they have to attend a two-day seminar together every month.

He added that teens that have indulged in "inappropriate sexual behaviour" have a sense of shame and won't readily admit everything they've done. "If the boys disclose something criminal, like touching a neighbour's child, we have to report that to the state where the offence was committed."