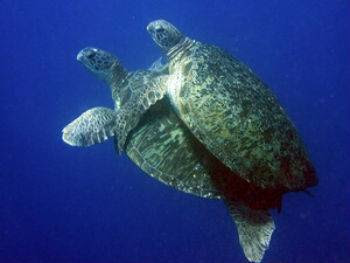 THERE'S A REASON why turtles are one of the oldest living creatures on the planet—they mate, and they've been mating for 50 million years.

In Germany, the fossilised remains of a pair of turtles were unearthed from an ancient lake and scientists caught them in a compromising position. Apparently they were doing the wild thing when they were killed some 50 million years ago.

The Royal Society journal, Biology Letters, reported that the turtles must have been shagging on the surface of the lake when they were overcome by the toxic water, presumably from the release of volcanic gases, and sank into the deep.

"We see this in some volcanic lakes in East Africa today," explained Dr Walter Joyce from the University Of Tübingen. "Every few hundred years, these lakes can have a sudden outburst of carbon dioxide, like the opening of a champagne bottle, and it will poison everything around them."

These particular turtles, called Allaeochelys crassesculpta, are about 20cm long and as with most species the females are larger than the males. The nearest living relative today is the pig-nosed turtle, or Carettochelys insculpta, a much bigger species found in Australia and Papua New Guinea.

Nine pairs of turtles have been discovered at the site in the last 30 years, but this is the first sexed-up couple they've found.

"We've demonstrated quite clearly that each pair is a male and a female and not just two males that might have died in combat. This fact combined with the observation that their back ends are orientated toward one another, and the two pairs with tails in the position of mating, that's a smoking gun in our view."

It's said to be the only evidence in the fossil record of vertebrates being preserved in the act of having intercourse. For invertebrates, there are numerous examples in the scientific literature of copulating insects being caught in amber.

And for that matter, did you know know that a honey bee has exploding testicles? Their genitals actually snap off inside the queen bee and act as a plug to prevent other males from knocking her up. That's small comfort to a dead bee whose penis has been blown to smithereens. (BBC News)
Posted by sabahkini.net at 00:12