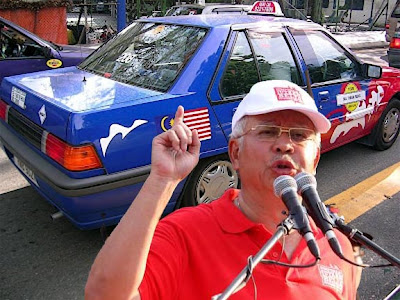 SLAVERY....The PM today called the leasing of taxis “a form of modern-day slavery” that he abhors.

The prime minister promised a “new model” for all taxi drivers, saying the government will award individual licences to them instead.

“In one or two years’ time, we are moving to introduce a new taxi model (system). We are in the midst of framing it.

“I don’t like it when I hear that companies get too many taxi licences. The era where we give taxi licences to individual companies will end,” Najib said today, to cheers from a 10,000-strong audience mainly comprising of taxi drivers.

“We will provide individuals with a new system. The interests of the individual taxi driver will be taken care of as best as possible.

“The leasing of taxis is a form of modern-day slavery which I do not like,” the Barisan Nasional (BN) chief stressed.

Plans to revamp the licensing system of taxis will be included in the government’s new programme titled TR1MA (Teksi Rakyat 1Malaysia) — a collaborative effort between the Land Public Transport Commission (SPAD), the Ministry of Information, Communication and Culture as well as 1Malaysia Development Berhad (1MDB).

Najib said 1MDB has pledged to allocate RM35 million a year to subsidise the purchase cost of car tyres for all taxi drivers.

“They can be obtained from about 300 tyre service centres nationwide,” the PM added.

Besides that, he said the Information, Communications and Culture Ministry will provide a RM1 million insurance fund for all taxi drivers throughout Malaysia.

“Taxi drivers have to be satisfied, their welfare needs to be looked after,” Najib stressed.

He pointed out that taxi drivers played a major role in shaping the opinions of tourists who came to Malaysia.

"They are an important group in forming the image and perception tourists have of the government and country.

"We gather here to express our gratitude to a group within society who have a big role," Najib said.

The Umno president urged taxi drivers to help the government shape a good reputation for the country.

"If a tourist gets in a taxi and see a nice smile on the driver instead of an angry face, then they will assume that all Malaysians are like that," he said.
Posted by sabahkini.net at 09:16