MAS AIRBUS A380 TOUCHES DOWN AT KLIA 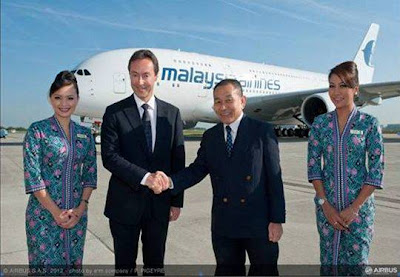 Commanded by Captain Norshid Ali, Flight MH5439 from Toulouse had 91 guests and selected MAS staff on board.

The aircraft received a traditional water cannon salute as it taxied towards the airport's A380-equipped terminal.

Speaking at the welcoming ceremony, Transport Minister Datuk Seri Kong Cho Ha said he was pleased to note that despite the mounting continuous challenges in the global commercial aviation industry, MAS has met its obligation to fulfil the corporate objectives required by the government.

"The arrival of the A380 today is proof that the national carrier has once again taken the lead to support the nation's aspirations to be a leader in trade and tourism activities," Kong said.

Earlier, Ahmad Jauhari said the A380 is part of MAS' fleet renewal initiative to bring a new level of product and experience to the airline's guests.

MAS cabin crew also hosted a guided static tour of the double-deck aircraft for around 50 guests, comprising officials from the Ministry of Transport, senior airport officials and members of the media.

Meanwhile, in conjunction with the A380 arrival, the Transport Minister also officiated the opening of the upgraded Malaysia Airlines' flagship Golden Lounge at the KLIA Satellite Building, the statement added.

To enhance the overall customer experience for Malaysia Airlines' guests, MAS cabin crew are on hand to serve guests in the Lounge, the statement said. (Bernama)