WHY CONCRETE DRAIN AT THE KG. DAMBAI STILL DELAY? 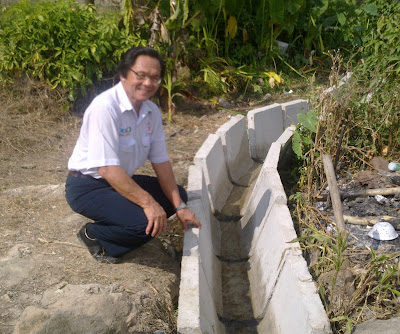 SABAH DAP Vice Chairman Edward Ewol Mujie said today that the residents at KG. Dambai, Inanam complained that the construction of the concrete drain at the Kg. Dambai not progressing as expected.

Edward said when he visited the Kampong he noticed that according to signboard erected at the site the project started on 04.06.2012 and to be completed on 29.06.2012. He noted that only a few U shaped block that supposed to be used to construct the drain has been laid in a loose position and the other are lying here and there along the road.

The residents told him that the contractor concerned only come for a while and disappeared and the residents said that they do not understand how come such a simple project can’t even be completed according to schedule. They also wondered whether the contractor has been paid or otherwise.  The resident said the drain is very important to prevent the area from being flooded when there is a heavy rain.

Hence, Edward urges the authority concerned to ask the contractor to speed up the construction of the said drain.
Posted by sabahkini.net at 18:24