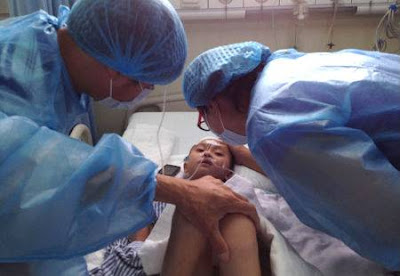 SELL.....Wang Yan's family had to sell everything they owned to pay the hospital.

A SEVEN-YEAR-OLD girl in China is lingering on life-support after she jumped between her mother and the man who was attacking her, shielding her mother but suffering blows to her skull as the man went after them with a spade.

According to Wang Yan’s relatives and the Anhui Province police, she was with her mother in Zhangli village when the man, believed to be mentally unstable, attacked them without provocation. She suffered multiple skull fractures and severe trauma to her brain, but sadly her brave effort was in vain—her 47-year-old mother died at the scene.

Wang Yan is now at the Shanghai Blue Cross Brain Hospital where she’s already undergone one brain surgery and is in a coma. According to her family, she suffered respiratory failure for two hours after the attack and was attached to a ventilator for 10 days.

"Her vital signs are stable but her condition is far from improved," said her physician Zhou Kexiang. "She’s been released from intensive care and her physiological responses are good, but she’s not out of danger yet."

Zhou said the priority is for Wang Yan to regain consciousness. "A lasting coma may lead to deterioration or complication in other body systems," said Zhou.

According on Wang Yan’s nurse, however, she has responded to physical contact and sound. “When you call her name or clap, her eyes look as if they’re following the sound. And there were tears coming from her eyes when we inserted a tube into her stomach," he said. "I can sense a strong desire to live."

Meanwhile, Wang Yan’s 22-year-old brother, Yongma, said he doesn’t know how they’re going to pay for her escalating hospital bill and their mother’s funeral. Their 62-year-old father had cancer surgery last year and that already put the family in serious debt.

Yongma has only been working odd jobs since he dropped out of high school and has spent his entire savings of 70,000 yuan (RM35,000) on the first six weeks of Wang Yan’s treatment. He said the family managed to scrape up an additional 8,000 yuan (RM4,000) by selling everything they owned in their house.

Scores of Shanghai residents have visited Wang Yan since her story broke and several have contributed towards her medical expenses. "We're really grateful to these kind-hearted people, but the doctors have told us we might need 300,000 yuan (RM150,000) for more treatments," said Yongma. "I don't want to beg but I want my sister to live."

Meanwhile, police have detained a suspect identified only as Shi Chao. (China Daily)
Posted by sabahkini.net at 00:07