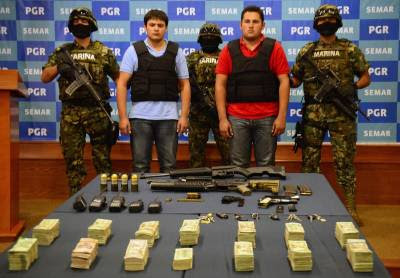 TRAFFICKER.....Felix in red, standing next to alleged drug trafficker Kevin Beltran Rios in blue, was presented to the press as the drug heir El Gordo.

A MAN accused of being a cocaine trafficker and the son of Mexico's most wanted drug kingpin—Joaquin "Shorty" Guzman, aka "El Chapo Guzman", leader of the Pacific drug cartels—is really just an innocent auto salesman swept up in a case of mistaken identity, said his attorney.

Mexican marines seized the suspect last week in an operation in Zapopan, Jalisco State just outside Guadalajara, and flew him to Mexico City where they paraded him in front of the media and identified him as Jesus Alfredo Guzman, alias "El Gordo" or "The Fat One".

They said they found him with an arsenal of rifles, pistols, grenades and about US$160,000 in cash. But lawyer Veronica Guerrero told a news conference that her client's real name is Felix Beltran Leon and he's a 23-year-old father of a toddler who works with his mother-in-law at a used car dealership. PHOTOS.....Felix's mum Elodia holds up photos of her sons during a news conference.

"This is a case of total confusion over people," said Veronica, who was accompanied by Elodia Leon Vega, who said she is Felix's mother. Mexico's federal attorney general's office said it would seek to establish the identity of the suspect using DNA tests and other methods.

The arrest won praise from the US Drug Enforcement Administration, which has sought El Gordo since he was indicted for cocaine trafficking in 2009. His father, El Chapo, faces dozens of charges of racketeering and drug smuggling in US courts. There's a US$5 million reward for his capture. 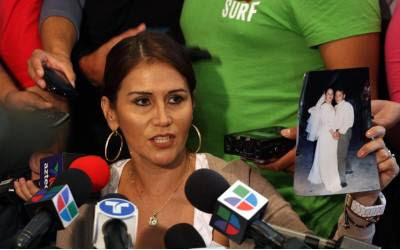 WEDDING....Veronica shows Felix’s wedding photo and says he's the son of a woman who has nothing to do and doesn't even know El Chapo.

The arrest came a week before Mexicans voted for a leader to replace President Felipe Calderon. Brutal clashes between drug cartels and Mexican authorities have killed more than 55,000 people since Calderon launched a crackdown on the gangs in late 2006. (Reuters)