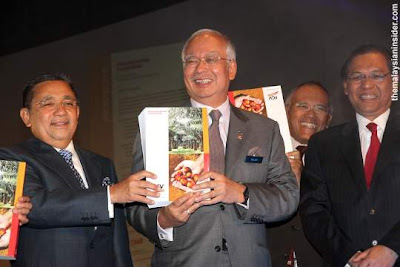 LISTING.....Prime Minister Datuk Seri Najib Razak (centre) holds up the prospectus for the FGVH market listing during its launch ceremony.

KUALA LUMPUR : Despite strong initial demand for shares in Felda Global Ventures Holdings Bhd (FGVH) ahead of its listing, investors are unlikely to stick long with the state-run palm oil operator based on its weak yields compared to rival firms, the Wall Street Journal (WSJ) has said.

The international business paper noted that the state-run commodities firm has raised US$3.1 billion (RM9.3 billion) in sales for stocks of its initial public offering (IPO) ahead of its debut on Bursa Malaysia tomorrow, but posted a 50 per cent drop in this year’s first quarter profit yesterday due to higher costs in planting palm oil trees.

“The profit slip is in contrast to the IPO prospectus, which promoted the group’s expertise as the world’s third-largest palm-oil plantation operator,” it said in an article titled “Felda Plants Seeds of Investor Discontent” published yesterday.

In a scathing commentary under its “Heard on the street” column, WSJ highlighted that Felda’s first quarter income has barely budged, growing only 1.8 per cent from last year.

The paper noted that Felda had given flimsy reasons for posting such poor growth, saying it had to pay a higher-than-expected price for crude palm oil.

“There can be few excuses for such poor foresight. A plantation company should know the cost of planting new trees,” the paper said.

It pointed out that the palm oil operator was planting new trees because those in its plantations were aging, compared to those of its competitors and therefore resulted in lower yields.

“Nasty surprises like this won’t do much to help rekindle investor enthusiasm for IPOs. Nor are investors likely to stick long with Felda if its prospects can wither so quickly,” WSJ said.

FGVH is Asia’s biggest IPO since February 2011 and the second biggest this year behind social media network Facebook’s float, which raised US$16 billion.

The IPO of 2.188 billion shares is currently based on an indicative retail price of RM4.55 a share with an institutional offering of 1.915 billion shares, while settlers and employees of Felda will gain access to 200.6 million shares, or a 5.5 per cent stake, out of a total retail offering of 273.61 million.

This would see a total of RM9.959 billion raised from the listing exercise, with another half a billion ringgit available through an overallotment option of 109.4 million shares.

According to the prospectus, RM5.5 billion in gross proceeds from the sale would accrue entirely to the selling shareholders with RM4.5 billion going into capital expenditure. (TMI)
Posted by sabahkini.net at 13:22