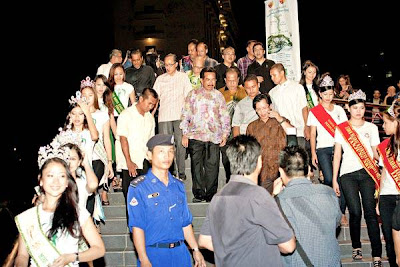 WALKABOUT....Musa (centre) accompanied by Masidi, Yong, Abidin and others doing the walkabout at the Sembulan River Park.

He said the project costing RM38 million and divided into four phases was one of three tourism projects identified in the implementation of the Sabah Development Corridor (SDC) programme.

Speaking on Sunday night at the official opening of Sembulan River Park in Sadong Jaya which is under the purview of the Kota Kinabalu City Council (DBKK), Musa said another of the tourism projects was the Atkinson Clock Tower beautification project.

Located near Padang Merdeka here, Atkinson Clock Tower which was completed in 1905 is an important heritage site of the state. The beautification project estimated to cost RM12 million, is expected to commence next year.

On the Sembulan River Park project, Musa said it was a three-phase tourism project costing a total of RM45 million under the SDC.

He said with the completion of the riverfront project, the Sembulan area had changed face in tandem with rapid development in the surrounding areas and in keeping with Kota Kinabalu’s status as a natural resort city.

Musa said the state government, conscious of the financial burden and major responsibilies of DBKK, had allocated RM19 million for DBKK to carry out development projects and maintenance works compared to RM17 million last year.

He said these included garbage collection, maintenance of landscapes along the main roads and of drains and monsoon drains.

The Chief Minister also assured City Hall that the state government will always support its efforts to beautify the city and surrounding areas.

“I will assist and seek financing if not for all the beautification projects but for most of them,” he said.

Musa added that the state government would strive to increase its financial resources to ensure that all the beautification plans as well as programs are realized.

“We will implement projects that we feel are important and I believe that there are many areas with potential in the city that can be developed into tourist attractions,” he said, adding that the government always has the interest of the people at heart.

Musa said the Sembulan River Park also indirectly improves public facilities in the city and can be a tourist attraction for the state.

He also pointed out that Sabah’s political stability is among the reasons for the increase in tourist arrivals to the state.

“It is therefore very important that we preserve the existing unity and harmony so that more tourists will visit Sabah,” he said and stressed that no tourists would want to visit a place that is in turmoil.

Musa also said he was impressed with the changes in Sembulan which is now cleaner and more beautiful.

He praised City Hall for its continued effort as well as commitment towards the cleanliness, safety and comfort of the city.

Earlier, Mayor Datuk Abidin Madingkir said DBKK planned to create a network of better pedestrian walkways in nearby areas, connecting such spots as the State Museum, Islamic Museum, State Mosque, Sacred Heart Church and the railway station which are within 10 minutes’ walk from the Sembulan River Park. (theborneopost)
Posted by sabahkini.net at 12:39