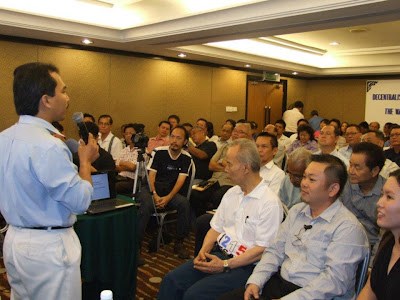 TAMPARULI: A recent debate organised by NGO Desah on whether a state or national party is the solution to solving Sabah's problems saw Star (State Reform Party) being asked as to who gave its Sabah chapter President Datuk Dr Jeffrey Kitingan the right to claim to represent Borneo through his Borneo Agenda.

This is in account of Borneo being vast and including Kalimantan and Brunei.

Moderated by Dr Arnold Puyok of UiTM, some 200 mostly supporters of the two parties thronged the Tamparuli Recreation Club for the debate between Pajudin Nordin of PKR and Edward Linggu of Star.

Star countered by asking who gave the mandate for Pakatan Rakyat to write their Buku Jingga manifesto?

Star contended that West Malaysian parties do not have Sabah's best interests at heart with PR being no better than another BN exploitive clone.

Pajudin replied that all leaders and the supporters contributed to the Buku Jingga and that had Jeffrey been with PR, his signature would have been included as well.

PKR's Pajudin pointed out that Star was a resurrected Sarawak import that was rejected by Sarawakians with its candidates losing their deposits in the elections.

"Star is a party formed to champion the Dayaks," he said, noting there were some Star supporters in the audience with the Sarawak flag on their sleeves.

He was also blunt in accusing Star of being a spoiler.

Star retorted by branding PR a Malayan political coalition which should rightly be confined within the shores of Malaya as was agreed between leaders during the formation of Malaysia to vie for only 65pc of the parliamentary seats while Sabah and Sarawak were rightly entitled to 35 percent of the parliamentary seats as a check and balance system to avoid concentrating two-third majority in Malaya for KL to change the constitution at its whims and fancies.

PKR came prepared with their own vocal cheerleaders puncturing the debate session with shouts of "Reformasi" and "Lain Kali-lah" every time Star supporters shouted "Ini kali-lah".

Star revealed one of their ideas to be implemented once taking over Sabah - the formation of a Native Land Foundation to buy over distressed NT lands on foreclosure or from owners until they redeemed them later with means acquired thereafter.

Star Sabah head Dr Jeffrey had mentioned in the first debate that the party aspired to be a kingmaker working with either the BN or PR in power to regain Sabah's autonomy and rights as an equal partner in the Federation of Malaysia comprising Malaya, Sabah and Sarawak.

PKR asked the audience to ponder whether was it realistic for Star to be able to affect all the desired changes without changing the structure of the Federal Government.
Posted by sabahkini.net at 12:26