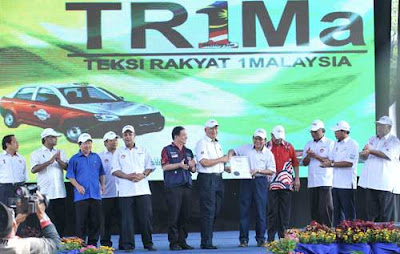 RECORD: Najib (centre) and Dr Rais hold ‘The Malaysia Book of Records’ certificate on the largest gathering of 10,000 taxis in Malaysia at the Bukit Jalil Sports Complex Stadium.

The Prime Minister said that under the TR1Ma programme, the first driver of each taxi would receive a tyre subsidy voucher of RM520 to replace four tyres for a period of two years.

“The subsidy of RM34.84 million channelled by 1Malaysia Development Berhad will benefit 67,000 taxi drivers nationwide,” he said when launching TR1Ma in the presence of 25,000 taxi drivers at Stadium Bukit Jalil, here.

Najib said the types of taxis that were eligible to receive the subsidy were budget taxis, executive taxis, hire cars and airport taxis.

In addition, he also announced that the government, via the Ministry of Information Communication and Culture, would provide a fund of more than RM1 million for the Personal Accident Insurance Protection Scheme to 100,000 taxi drivers throughout the country.

The prime minister said this was a short-term initiative of the government to ease the burden of taxi drivers in the country.

Najib said as a government that was concerned about the welfare of all groups, it was appropriate that the problems of the taxi drivers, who formed a big group, should also be attended to.

“We have the intention and plans to improve the welfare of the taxi drivers so that they will have a better future,” he said.

The prime minister also announced that in the long term, the government was thinking of introducing a new model for the growth of the taxi industry by ensuring that it could provide the best service to the passengers besides continuing to look after the welfare of the taxi drivers.

He said that among the features for the new model was the system of issuing taxi permits to individuals.

Najib said the government was also reviewing to relax the granting of rebates to taxi drivers to dispose off their old taxis so that the aid could be enjoyed by more taxi drivers.

Meanwhile, the prime minister also called on the taxi drivers to reflect noble values because as the country’s mini ambassadors, they played an important   role in helping to project a good image of the country to foreign visitors.

“I want you to play a major role in raising the image of the country.

“Help us in our daily transactions because we want to transform the country not only in terms of the economy and revenue but also in terms of developing the people’s character to uphold noble values,” he added. (Bernama)
Posted by sabahkini.net at 08:57