CHINESE VOTERS ARE KINGMAKERS FOR GE13 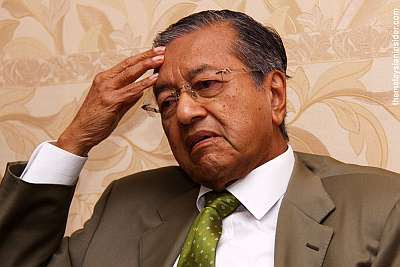 KUALA LUMPUR : Chinese voters will decide who forms the government after the general election which must be held within a year as the Malays are divided among three parties, Tun Dr Mahathir Mohamad said today.

The long-serving former prime minister, whose last election victory in 1999 was widely credited to the swing of Chinese voters to Barisan Nasional (BN), said this forced the opposition PKR, PAS as well as his Umno to cede to Chinese demands.

“The fact is today all three Malay parties are trying to butter the Chinese electorate. So they become racial and cater to racial demands,” Dr Mahathir (picture), who is still widely influential in Umno despite retiring from active politics nine years ago, told a forum on politics and business today.

Malaysia’s fourth prime minister said he was known as “Mr Malay Ultra” following the 1969 general election which precipitated the country’s worst race riots with up to thousands slain in street clashes.

He won five elections with a two-thirds majority in Parliament after taking power in 1981, including the 1999 polls which followed the controversial sacking of Datuk Seri Anwar Ibrahim as deputy prime minister, an episode that split the Malay vote and threatened to derail his leadership.

Dr Mahathir said the fact that Chinese supported him in 1999, to the point where DAP stalwarts Lim Kit Siang and Karpal Singh failed to be elected as MPs, “shows the Chinese are not going to vote for their own people if they think they can benefit.”

“Towards the end of my time as prime minister, I got a lot of support from non-Malays and they were the ones who determined that we had a strong government despite the loss of faith among the Malays,” he added.

Chinese voters stayed with the ruling coalition in 2004 before disenchantment with Tun Abdullah Ahmad Badawi, who succeeded Dr Mahathir in 2003, saw them voting for opposition parties in 2008, with analysts estimating that at least 70 per cent still back Pakatan Rakyat (PR).

Dr Mahathir also said today the 13th general election would centre on race as Malaysia has become more racist than ever, putting more pressure on the BN administration which was weak after failing to secure a two-thirds majority in 2008.

“In this country, we are very racist, even more than before. The next election is going to be about race. Who gives what, who gets what based on race. When the government is weak, it caters to demands which are not going to be good for the country in the long run,” he said.

Najib took over from Abdullah ostensibly to improve on BN’s performance in the next general election and observers believe he requires an improvement on the 140 federal seats won and to regain some of the states lost to be assured of remaining in power. (TMI)