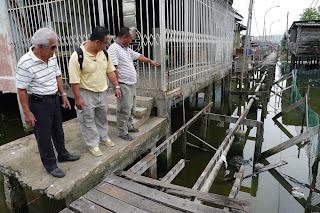 MISSING....Kassim and members of SAPP inspecting the bridges with missing wooden planks at Kg Sembulan. This bridge may be invisible during BN leader visit.

SAPP Sembulan Selatan Branch, Kassim Busok lamented that the authority should not turn a blind eye on the problems faced by the residents living in Kampung Sembulan.

Kassim said the people have to put up with the hips of rubbish, bad odour and the worse is risk falling into the sea when plying the broken bridges.

Kassim pointed out certain section of the bridge was completely without wood planks and it seems ridiculous and senseless that the authority should allow these to happen for such a long time.

“The government had recently spent RM24 to beautify the Sembulan River Park much for the sake of the tourists put not paying attention to the living conditions of the people in the same area, this is absolutely unfair," said Kassim.

“The 800 meters length Sembulan River Park costed RM24 is equivalent to RM30,000 per meter; the same amount of money could have been used to construction a few hundred low cost houses for the local people who could not afford a house, said Kassim.

A resident Tan said the Mayor and YBs visited the place not long ago but without trying out their skills by walking on the broken bridges and after they left nothings had happened to improve the situations there.

Kassim said the government must treat the people with dignity and not just spending huge amount of fund for glamorous but less useful projects.