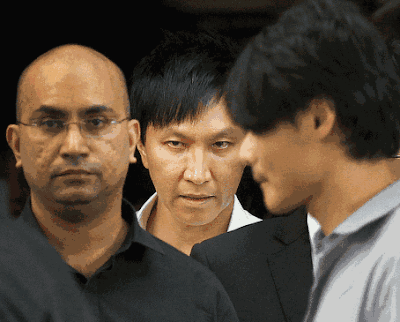 SINGAPORE: The founder of one of Singapore’s largest evangelical churches was charged with fraud Wednesday for allegedly funneling millions of dollars to his wife’s singing career.

City Harvest Church founder Kong Hee, center, is surrounded by supporters as he leaves the Subordinate Courts Wednesday, June 27, 2012 in Singapore. Authorities have arrested Hong and alleged millions of dollars in church money was used to aid the career of his pop singer wife Ho Yeow Sun. The Charities Commissioner said at least $23 million Singapore dollars (US$18 million) of church money instead financed the music career of Ho. AP/ Wong Maye-E

City Harvest Church founder Kong Hee, 47, was charged with three counts of conspiracy to commit criminal breach of trust in connection with a scheme to syphon at least 23 million Singapore dollars (US$18 million) of church funds from 2007 to 2010 to finance the singing career of his wife, Ho Yeow Sun.

Known professionally as Sun Ho, the 40-year-old has put out several Mandarin and English pop albums and songs, including a 2007 collaboration with pop star Wyclef Jean called “China Wine.” She was not charged Wednesday.

He did not comment on the accusations in court but earlier had tweeted that he trusted Jesus and referred to Tuesday, when he was arrested, as a “tough day.”

Prosecutors also charged four other church leaders with breach of trust and conspiracy to commit falsification of accounts.

The charges follow a two-year police investigation sparked by local media reports that depicted Ho’s lavish lifestyle, including a $20,000-a-month Los Angeles mansion. A church member had alleged in 2003 that City Harvest funds were paying for Ho’s singing career, but he later retracted the statement and publically apologized to Kong and Ho.

The Charities Commissioner on Tuesday suspended the five charged church leaders along with Ho and two others from their positions as trustees, board members and employees at City Harvest.

Kong gained notice for his charismatic preaching style in front of tens of thousands of worshippers during services at the Suntec Convention Center. He said on his Twitter account Tuesday, “Tough day. I trust in You, Lord Jesus. Thy kingdom come, Thy will be done!” (AP)