BE CAREFUL OF YOUR ACTIONS MARINA! 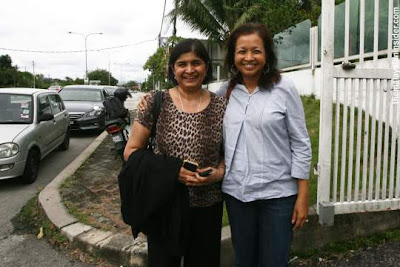 KUALA LUMPUR : Tun Dr Mahathir Mohamed has cautioned his daughter to be wary of her outspokenness as well as support for groups like Bersih and sexuality rights movements, saying these may affect her family members who are still active in politics.

The forthright Datin Paduka Marina Mahathir has disagreed with her father on occasion, most notably her consistent support for the electoral reforms group. She had participated in the last two Bersih rallies in the city capital.

“I do hope she will realise what she is doing is not good for herself, not good for the government party at least. She should also be sensitive about her brother who is contesting in the election,” Dr Mahathir said, referring to his son Datuk Mukhriz Mahathir, who is currently international trade and industry deputy minister.

The former prime minister said this in an interview with online television station The Malaysian Observer (MobTV).

“Maybe it’s because she has no ambition so she speaks her mind. I cannot agree with the things she is doing, but nowadays you cannot tell your children ‘please stop this, please stop that’; they have a mind of their own,” said the country’s longest-serving prime minister.

Dr Mahathir said while he respected her stand on speaking up for the underprivileged, he did not like the idea of her “associating” herself with Bersih whose agenda, he believed, has been “hijacked” by the opposition.

He also told his daughter to draw a limit to how much support should be given towards the lesbian, gay, transgender and bisexual (LBGT) community.

“She (has) never said she supports this; I hope she doesn’t. She cared for this people...but she has to draw a line between them and the idea that being homosexual is okay, (or that) men marrying men is okay,” he stressed.
Posted by sabahkini.net at 12:46