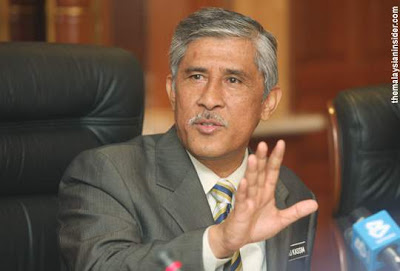 DISCIPLINARY..... Abu Kassim said the commission will make its recommendations to the complaints committee before announcing the disciplinary action.

KUALA LUMPUR : The Malaysian Anti-Corruption Commission (MACC) has finally decided how it will punish its three officers implicated in Teoh Beng Hock’s fatal fall in 2009, nearly a year after they were named by a royal commission of inquiry (RCI).

MACC chief commissioner Datuk Seri Abu Kassim Mohamed told reporters today that the commission would first make its recommendations to its complaints committee before meting out appropriate disciplinary action against the trio.

He would not, however, reveal the nature of the punishments to be recommended, merely saying the matter would be finalised at the committee’s next meeting.

“At the moment, we have decided what disciplinary action to be taken, we will inform the complaints committee... during its next meeting,” he said after handing over MACC’s Annual Report to members of the Special Committee on Corruption at the Parliament lobby this morning.

On April 9 this year, Abu Kassim had said the MACC was still investigating the trio, who were suspended after the RCI report was released in July last year.

“Some of them have given (their explanations) and the process will continue.

“The trio’s cases are being discussed by the committee. I will check the stage of investigation,” he had told reporters in Parliament.

The Malaysian Insider had reported on July 23 last year that the MACC had suspended the three graftbusters after the RCI found that they had played a role DAP aide Teoh’s death in 2009.

In a statement, the MACC had said at the time that the trio’s suspensions were pending the outcome of an internal probe on the findings of the RCI report into Teoh’s demise.

“Pending the outcome of this report, all three officers will be suspended or barred from any investigation operation,” the statement had said.

The commission said the special investigation team to conduct the probe will be led by MACC deputy chief commissioner (management and professionalism) Datuk Zakaria Jaffar.

It did not at the time state, however, the names of the trio but it is believed that they are former Selangor MACC deputy director Hishammuddin Hashim and enforcement officers Arman Alies and Mohd Ashraf Mohd Yunus, all of whom were named by the RCI.

On April 5 this year, Attorney-General Tan Sri Abdul Gani Patail had refused to clarify if his office would prosecute the MACC trio, only saying that the case had been referred back to the commission.

“I only charge, not investigate. I don’t want to argue with you,” Gani had said after a meeting with de facto law minister Datuk Seri Mohamed Nazri Aziz and MACC investigations chief Datuk Mustafar Ali, when asked if the trio had committed any wrongdoing.

Nazri had said in a written reply in Parliament to Serdang MP Teo Nie Ching on April 4 that police were investigating the case and the Attorney-General’s Chambers was now studying investigation papers after a complaint lodged by Teoh’s sister, Lee Lan, on October 28 last year.

But Teo, the DAP deputy publicity chief, told reporters that the reply contradicted Nazri’s March 29 reply to PKR’s Gopeng MP, Lee Boon Chye, when he said “the AGC has found no criminal wrongdoing... no legal action will be taken against the three MACC officers.”

The minister in the Prime Minister’s Department had said on October 24, 2011 that the A-G was not pursuing legal action against the three MACC officers implicated in the DAP aide’s 2009 death as no police report had been lodged and there was a lack of investigative evidence.

The Padang Rengas MP refused to comment on the matter on April 5, only sending a message through his aide for reporters to “clarify with the A-G as his officer provided the response.”

Teoh’s body was found on a landing of Plaza Masalam in Shah Alam, the MACC’s headquarters at the time, the day after he was interrogated overnight on July 16, 2009.
Posted by sabahkini.net at 12:56