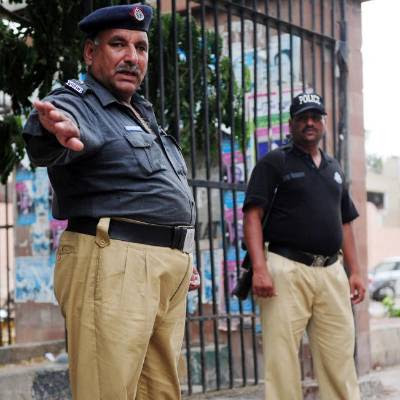 DUTY....A Pakistani policeman gestures while on duty along a street in Karachi.

POLICEMEN in Pakistan are widely seen as corrupt and ineffective. Now their weight is coming under the spotlight as well. Pakistan is cracking down on portly policemen after only a quarter of the 19,000 officers in the Punjab province passed a fitness test.

The plump police, responsible for safeguarding the most populous province, were warned in letters to trim their waist-lines to the regulation 38 inches by the end of the month, local newspapers said. Those who fail may be removed from field duties, The News reported.

Last week local TV channels had repeatedly screened footage of overweight officers. They were shown snoozing in chairs, talking on phones and standing belly to belly, buckles straining. The coverage made Punjab's Inspector General of Police Habib ur-Rehman even more determined to get his officers fit to fight crime, said a policeman from headquarters in Lahore.

The News reported that several policemen objected to the tests because senior officers had been exempted, and the men conducting them were overweight themselves. Official police spokesmen were not available for comment, and it was unclear whether the problem affected other provinces to the same extent. (Reuters)