A VISIT TO MUSA'S NEW TENOM 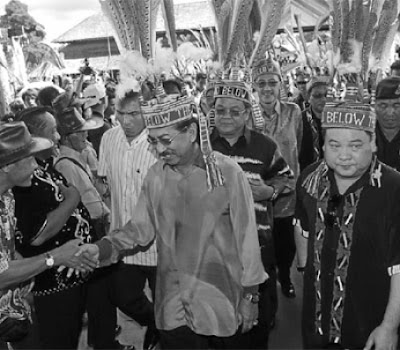 In October 7, 2003, when the Sabah economy was going through turmoil, Musa Aman took charge of Sabah as the Chief Minister. Turn to March 2008 Barisan National and Musa Aman in Sabah is stronger than ever. BN had swept the polls in Sabah retaining power with more than two-thirds majority winning 59 out of 60 seats contested. In this age of fragmented polity where getting a majority seems unreal, BN under Musa Aman bagged 65 percent of the votes in almost all the places. Interesting to note is that these poll victories continued even two years later in 2010 when the PBS won Batu Sapi Parliamentary constituency in a by-election.

Then in May 5th 2013, Musa Aman breaks the 9-year CM jinx and becomes the longest serving chief minster in the history of Sabah and brings Barisan National to another impressive two-thirds victory for the state seats and winning 22 out of the 25 Parliamentary seats. How did Musa Aman and the people of Sabah make all this possible?

One particular remark of Musa Aman caught my pride and attention. He claimed that only politics of development can do something good, not the politics of vote bank. He said, “I have succeeded to deliver my message that politics of vote bank or politics of appeasement would not do any good, but the politics of development would do.” The truth in this statement is the future of Sabah. The truth in this statement will bring in faith of the Sabah population into the political democracy. Development, prosperity and improvement of the standards of living will and can bring in a permanent political stability. And will tag along prosperity with stability.

Today we are being short-sighted. The political attitude is of vote bank politics, ‘blanket’ politics, immediate selfish goals and corruption ridden personal growth. It is vicious cycle that takes us away from socio-economic development. Musa Aman also could have been short-sighted. He could have assumed his imminent fall in the elections and could have concentrated his energies in making as much wealth as possible for a lifetime. Instead he chose the difficult path of development. He once said, “An opportunity to work is good luck for me. I put my soul into it. Each such opportunity opens the gates for the next one.”

Faced with massive economic losses brought in by 2001, he concentrated on reorganizing the government’s administrative structure including Yayasan Sabah and embarked upon a massive cost-cutting exercise when he took over as chief minister in 2003. As a result of Sabah government efforts under the guidance of Musa, Sabah registered a GDP growth rate of over 5% during his first tenure. This was one the highest growth rate among all the Malaysian states.

Sabah is probably the only state witnessing more than 7% growth for a long time and also the only state growing higher than the country’s 5-6 per cent growth. Sabah is growing faster than some of the ASEAN economies. Plan expenditure has also leapfrogged from RM 2 billion plus in 2003-04 to RM 4 billion plus in 2012-13. It’s all about security, infrastructure development, transparent policies and prudent State fiscal management, which have contributed to Sabah’s growth.

During my stay in Tenom, I remember Padas River a notoriously polluted river had begun to be transformed and now appeared to be much cleaner, although the water was still extremely yellowish with siltation brought down from the upper parts of Keningau and Trusmadi the second highest mountain in Sabah, now it is flowing bank to bank and the water is better quality. If the Padas River has begun to meander once again, that’s because the water is flowing freely from the upper parts of Keningau and Trusmadi, courtesy the ambitious river-cleaning project of Musa Aman.

Padas River in full flow is an apt metaphor for the miracle that Musa Aman has pulled off in making Tenom a model for rural/urban development. Today it boasts of wide roads, shorter time to reach Brunei, Lawas, Sipitang and even Kota Kinabalu, better traffic control and minimum traffic congestion and ample green spaces and the cleanest town in Sabah. It is a delight to hear Musa Aman speak about development. He once said, “Our roads will be as good as the Autobahns of Germany”.

Development of roads in the state epitomizes this wind of change. When a foreign tourist, who has been visiting tourist spots in the state for long, whom I met recently in Tenom was asked about the most visible change, he said it was road and the “Tenom Coffee”. Sabah, for long, remained infamous for its bad roads and pitiable connectivity. People suffered due to utter lack of connectivity. Though the state is criss-crossed by several rivers, there were very few bridges across them, forcing people to make long detours to reach their destination just across the river.

Musa said about the changing Sabah: “The state is experiencing all-round development because of our policy of ensuring that the benefits of development first go to those at the bottom of the social ladder. Over the years, we rose above the feelings of race and religion which Sabah is all about, and have worked tirelessly on the agenda of inclusive development of the state.”

It’s a proud moment for Sabah that a political leader is showing us the path of long term development to win a democratic election, to be a popular leader. This is learning and teaching to all the national and regional political parties, who have not been far-sighted like Musa Aman.

Lets salute to the power of development.
Posted by sabahkini.net at 16:00