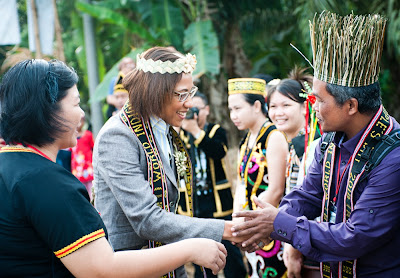 The event is being hosted in a traditional Orang Asli Jahut village setting from 8-11 August 2013. Since 1994, the UN’s International Day of the World's Indigenous Peoples or Perayaan Hari Orang Asal SeDunia (PHOAS) has been observed on August 9 each year to promote and protect the rights of the world’s indigenous populations. To honor the international agreement, Miss Michelle Gyles-McDonnough, the United Nations’ resident coordinator was in attendance during the celebration’s opening ceremony.

Miss Gyles-McDonnough emphasized that the UN recognises the rights of the Indigenous Peoples through the United Nation Declaration on the Rights of the Indigenous People (UNDRIP).  These include rights to land, the freedom to practice traditional livelihoods, to preserve and practice indigenous languages, as well as basic human rights such as access to healthcare, education and citizenship. “The UN will work to ensure that states’ behaviors and policies are consistent with the UNDRIP.  Let us work together to support our aspirations.  Let us work together to build a world that celebrates diversity, conserves our natural wealth, and allows us to realize our full potential,” said Miss Gyles-McDonnough. 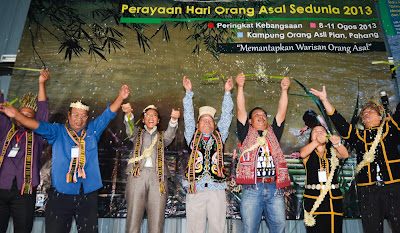 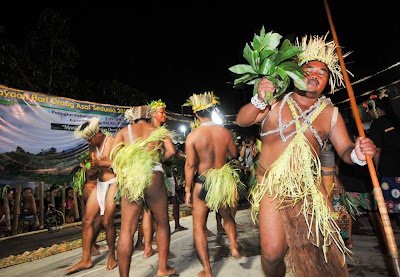 The event Chairperson, Mr. Yusri Ahon stated, “our ancestral land is the foundation of our existence: we plant rice, vegetables, and hunt for our food in the forest, we depend on the forest for our traditional medicine”.  In his statement, Mr. Ahon likened forest livelihoods to the way in which urban populations depend on supermarkets and clinics.

Highlights of the event included a blessing ceremony delivered by a Jahut Orang Asli elder, demonstrations of the preparations of traditional foods, various workshops, handicraft-making, and a traditional sports competition.

The theme adopted by JOAS this year is 'Memantapkan Warisan Orang Asal / Continuing the Indigenous Heritage'. The official UN theme is: 'Indigenous peoples building alliances: Honouring treaties, agreements, and other constructive arrangements'. Both indigenous and non-indigenous peoples play key roles in making treaties 'living documents' in their own communities, by establishing new ways to live together, building respect for one another, and cooperating in the pursuit of common goals.
Posted by sabahkini.net at 23:22