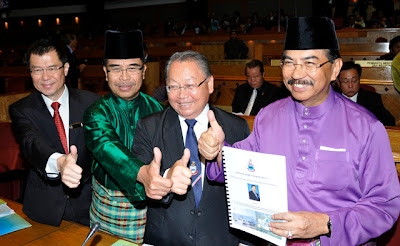 Why has State Government over-spent and tabled a supplementary bill for additional RM942,898,430? State Govt has already approved a budget of staggering RM3.9 billion for 2013.

Chief Minister has both political and moral authority to explain to people of Sabah bcos it involves public fund.

To quote a few items as examples from the supplementary bill 2013;

1) Jabatan Air on facility & utility: it was approved of RM20mil already and they are now applying for additional RM12mil of which RM4.5mil would be used to pay off outstanding ELECTRICITY bills and RM7.5mil would be paid for advanced procurement!

Isn't this ridiculous? How come Water Dept can owe up to RM4.5million outstanding electricity bill? Haven't they calculated from their past electricity usage and allocated accordingly in the last budgeted RM20million? This is simply unacceptable!

2) Tangki Air: this category was allocated RM4million to procurement & replacement purposes. During budget for 2013, they knew they needed Tangki worth up to RM4million, but now they r asking for additional RM8.6million, >200% more than the budgeted expense, which already been spent (before even tabling) and now needed 8.6mil to pay off the outstanding debt ! No matter how hard I tried to put it in a nicer way, it still sounded ridiculous and absurd! Spend first table later as if its your dad's money! The main point here is why did they use a total of RM12.6million to buy Tangkis? Were those Tangki Air used for election purposes?! If so, it actually means that govt has used public fund for their election purposes which is so wrong! So govt must come clean with this over expenditure!

Purchases, repairs & replacements of pipings in total can easily add up to RM106million! RM50million approved in state budget 2013 and now asking for additional RM56million. Overspending by >100% and the list goes on!

On second point, in my opinion, I think the supplementary bill has failed to appropriately prioritize the funding according to urgency of pertaining matters affecting our people. Allow me to quote some items as examples to illustrate my point.

As a Wakil Rakyat for Kawasan Likas and working around KK areas. I have easily noticed that this supplementary bill has not addressed the need for funds to cope with the pertaining issues of lack of parking and traffic congestion within the city.

Despite Mayor openly admitted (in newspapers) that DBKK is waiting for fund to build more car park buildings, none is allocated in this bill. None is given to allocate for wider road nor flyovers (also mentioned by Mayor) This is most disappointing that the govt has again turned deaf ear to city dwellers woes!

On d other hand, ONLY Total of RM5million (not sure if its direct cash handout or eradication program) was allocated for Anak yatim and miskinan and additional of RM500,000 was given in d supplementary bill.

Don't get me wrong I m not comparing these 2 items to belittle d importance of healthy upbringing of children by giving them FREE milk but look at d emphasis via the allocations given to these both categories. What does it tell us about government political will / efforts to help d poor?

I propose that State government should put more emphasis by increasing the allocations for orphanage and poverty (not sure also why these 2 are placed under one category) to show that the govt is serious in eradicating hardcore poverty. The allocation compared to State budget in terms of percentage is very depressing!

The examples of how priority was misappropriated and govt over spending are through out the whole supplementary bill.

So given d above factual basis, I totally do not support this supplementary bill bcos by supporting d bill, it also indirectly means that we condone to wrongdoings of government spending habits : 1) always overspend d budget 2) spend first table to recover back later via no accountability and lack of transparency bcos money has already been spent!

So I do not agree to this supplementary bill.
Posted by sabahkini.net at 14:50