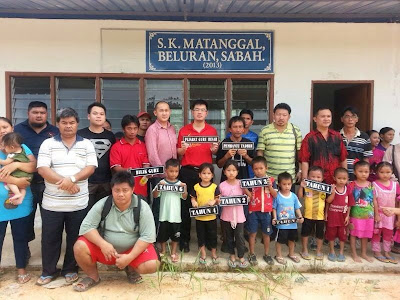 Likas Assemblyman Junz Wong has hit back at Deputy Education Minister I, Datuk Mary Yap Kain Ching for accusing him of looking for cheap publicity in highlighting the situation at SK Matanggal, Kg Kinadaan, Beluran.

The Democratic Action Party (DAP) Sabah assistant secretary said yesterday that the newly appointed deputy minister should stop LYING in the media but go to the ground to assess and solve the problems faced by the people.

"In all her lecturing and personal attacks against me, she failed to mention when exactly the school would be opened. She opted to insult me in her comments without getting her facts right," Junz claimed

Mary, who is the Member of Parliament for Tawau, was reported Sunday as saying Junz should refrain from making press statements on matters which he had no knowledge about, especially on how investigations were being carried out by the Ministry in reference to the respective State Education Department Office which logically would take time.

She said the DAP youth leader was motivated to gain political mileage and did not have the humility and the professional will to serve the people.

Speaking to a press conference at the DAP headquarters here, Junz rejected Mary's claims that DAP was trying to invite ANGER and Dissatisfaction among the villagers in pursuing the issue.

Junz, who is also National DAPSY Publicity Secretary, stressed that DAP went into the village to take a closer look at the problem after receiving complaints from the parents, who themselves accompanied him to the village.

"We don't know where the village is and we have never been there. We would surely be lost had the villagers not come to meet us and take us there themselves.

"I must say that Mary was either lying or being misled by her officers at the State Education Department when she said the children at the villages were already schooling in SK Binsulung because this could not be further from the truth.

"I challenge Mary to come with us and visit the villages, talk to the parents and the children there to find out the truth," he said

Junz pointed out that most of the children in five villages could be forced to forget about the shopping as the long distance and terrible condition of the dirt road from their homes to SK Binsulung made it impossible.

He said more than 100 school-age children were left with no education in Kg Kinadaan alone, hoping they would be able to enroll one day once the fully completed school in their village started operation.

Plight Of Villagers And Their Testimonies

One of the villagers from Kinadaan, Bongking Engga, supported Junz's claim that the village is located about 22KM to SK Binsulung and the road is impassable even to 4*4 vehicles during the rainy season.

"Walking will take more than six hours, that is if you walk really fast. If you use a vehicle, it will be faster but you will have to go through the estate where you have to pay RM10 every time you pass their gate.

"So, going to school will cost RM20 per day. And the gate will be opened from 7am to 6pm daily. You cannot pass outside this time," said the 31-year-old father of one.

Bongking said he was really DISAPPOINTED after learning about Mary's comment in the newspaper as it was clear that the latter did not understand the difficulties faced by the parents who were worried that their children would grow up illiterate like them.

"We have brought the issue up many times for years. We have talked to the leaders, to education department officers and all we were given were promises after promises.

"In 2011, we asked what would become of the children, already 11, 12 or 13 years old, and the answer was that they could enroll in 2012. But now the school is still not open and the children are getting older and left further behind.

"I too am worried because my child is now five-and-half years old and should be in school next year. I am worried the school will still not be open by then, and I will have to move out so I can provide him with education.

"But to where? I have no education and I am poor. I'm not sure if I can afford life in the city," he said

Another villager, Jumaru Jalot, also 31, said about 40% of the people from Kinadaan had moved out to the city in order to find education for their children.

As a result, many lands in the village were left idle, some had even been encroached by outsiders, said Jumaru who came for the press conference with his father.

Tugak Undong, 48, meanwhile said ALL his SEVEN children aged 9 to 21, never went to school jus like him and his wife, not because they did not want to but because the school was simply TOO FAR and his family could not afford the cost.

Rimlan Kusin, 42, said he had to move out and live in Penampang so that his two younger children, one of which is disabled, could go to school.

"I moved out, and with the help of a friend found a job here. Sadly it was TOO LATE for the two older children. They can no longer enroll in a primary school as they are already too old," he said.
Posted by sabahkini.net at 19:12