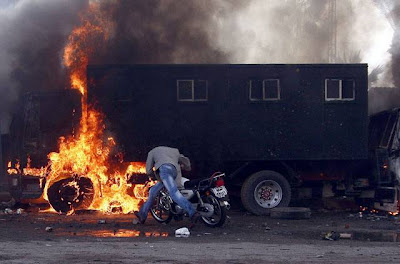 I remember Musa Aman once told me that he bought a property in Cairo on behalf of the Sabah State Government for accommodation for Sabahan students studying there. Years later he bought another property in Alexandria also for the same purpose.

While traveling from Cairo to Alexandria by road, Musa said he saw only arid land all the way. 5 years ago before Mubarak was ousted Musa made another trip by road from Cairo to Alexandria and was totally surprise that the the arid land he saw earlier had been transformed into green fields producing all kinds of vegetables, including tomatoes, cabbages and potatoes. Today its a different picture all together.

The carnage and discontent in Egypt is a sad example of what a civilised society has come to mean today. While the Arab Spring did in fact raise hopes of a democratic construct, all efforts towards such an event seem to have been forgotten.

Mohamed Morsi’s government was no doubt elected through the ballot. But does it make it truly democratic? How can an Islamic government, of the Islamic Brotherhood, be fully democratic guaranteeing the fundamental rights of individuals as generally understood? Even the Soviet bloc countries called themselves democracies or socialist democracies. May be the army in Egypt (and its western supporters) fear with reason that a Morsi dispensation would lead to a slide back, from the modernity gained so far, to eventual religious fundamentalism.

People’s protests too could be very reckless and violent when motivated by passions of a religious origin and combined with the Army’s usual brutal methods of suppression. Therefore, it is not surprising that there continues to be a heavy loss of civilian lives.

The persistent silence and reticence of the U.S. and the western block are rather intriguing in that the U.S., in particular, has chosen not to call the obvious coup a coup and is overlooking this development as if nothing has taken place at all; only to pre-empt the automatic stoppage of the aid to Egypt’s new regime. Even though the U.S. overtly proclaims to champion the cause of democracy and do business only with such countries, it has not hesitated to dilute that policy any number of times to advance its interests. It is unlikely that the U.S. will be in a hurry to bring about a truce.

If the Egyptian Army is the cause of the present situation by its direct military action, the Muslim Brotherhood too is equally responsible for fostering violence for political purposes. The Brotherhood is alleged to have terrorised numerous minorities, revealing its true face. In the past year, it has paid scant respect to human rights.

A bloodbath is never a solution to political struggle. The situation there calls for effective intervention by the United Nations and other nations. But sad, cannot see a Malaysian opinion, Malaysia have become a nation without a stand!
Posted by sabahkini.net at 14:36