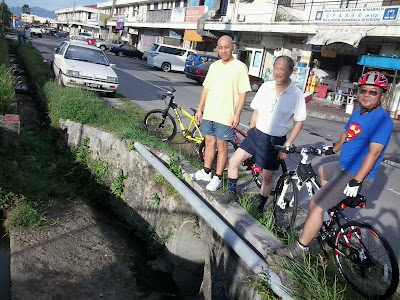 Hiew, Andrew, and Simon inspecting the drain in Taman Lido

The Adun Luyang Hiew King Cheu went for a site inspection on bicycle with his Special Assistant Andrew Lee Chee Kiong and Simon Yap last Sunday afternoon to check on several complaints received from the residents in Taman Lido and other areas near KK High School.

The earth drain at Taman Lido in between Lrg Bunga Puding and Lrg Bunga Dahlia 6 is overgrown with weed and grass. It is flooded during heavy down pour of rain and sometimes the people here can see snakes and mosquitoes coming out of the drain. The DBKK hardly comes to clear the drain here due to its inaccessibility from both ends. The invert level of this drain is lower than the invert level of the culvert underneath the road, and this caused the earth drain to always collecting water.

Hiew urges the DBKK to come to study the drain and this should be a concrete drain for the efficient draining of water from the housing area to the main drains. It will be pointless to clear the vegetation because it won’t be long the vegetation will grow back in a short time. The concrete drain will be able to solve these problems on the growth of vegetation and clogging of the drain. The drain water can flow fast into the main drain.

Besides, they have also received complaints from the restaurant next to the garbage cubical in Taman Lido shops. The operator complained that the foul smelly water inside the garbage cubical is constantly giving out bad smell causing his customers to eat uncomfortably. He lost quite some business and he has tried to clear by washing and yet couldn’t clear the bad smell. He hopes the DBKK can come to do something about the bad smell.