MOSQUE WITH A CHRISTIAN SIGNBOARD 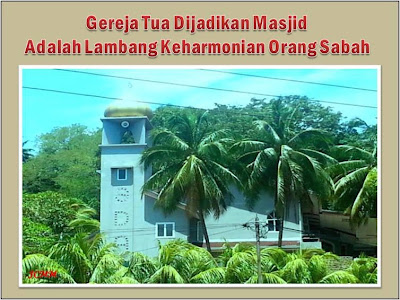 An Open Letter to the Government of Malaysia, the Judiciary, Religious Leaders and Politicians from both sides of the Political divide.

I attended this church in late 1971 being a member of te Seventh-day Adventist Church. We have our Sabbath School and Divine Service in the morning and Choir and Youth activities.

I remember when it was sold to a religious association and was converted into a mosque: they have the signboard in initial form removed but the SDA signage was put back. A lot of stories are heard why the sign is still up. The irony of it is one could see from any part of Central KK City when they look up to the tower the signage in initial form 'SDA' is clearly representing the Seventh-day Adventist Church who was the oiginal owner of the church. Immediately above the signage is the speaker from which everyone in KK would hear the azan call to pray fives times a day.

Within the vicinity of this building are several budget hotels and backpackers' lodge and tourist are commonly seen around here. They must surely all the tie have been wondering whether the building is used as a place of worship by two totally different religion.

My question is, which is which is defiling which, the SDA signage or the current usage of the building by the present owner? how are they notbdeiervdegie forbthat matter? How is this for comparisan with the Johor incident? How long can we be more confused  by the authorities? I would say the religious authority here in Sabah are much more practising the real concept of 1Malaysia, much more tolerance than their counterpart in the peninsular.
Posted by sabahkini.net at 00:19