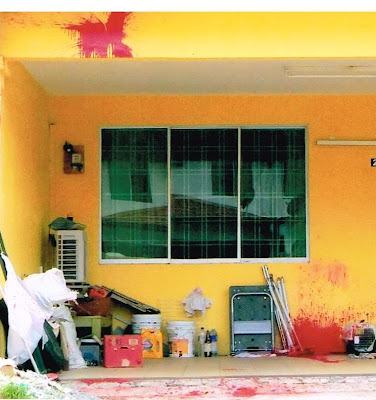 The violent action of the “Ah-Long” (Loan Shark) has caused fear and worries to the family members in the early morning-hour yesterday with red paint splashed into a residential house in Jalan Bundusan. The victims have approached the Adun Luyang Hiew King Cheu to seek help regarding the incident after they have lodged a police report. Very unfortunately, the red paint had also been splashed into the next door house causing damage to a car parked in the garage.

The police had asked the victims to provide more evident like CCTV recording together with any information concerning the Ah- Long (loan shark). Meanwhile, the investigation will commence to pin on the person who splashed the red paint.

Hiew said he would like the people to think about the consequences and be very careful in borrowing money from unauthorized money lenders, and many such cases had been brought to his office in the past few months. He advised that, “don’t forget, you borrowed and you must pay back, and if you cannot pay the high interest, don’t borrow”. It is not wise to borrow money and bring trouble to your wife, family and your elderly mother or father. In many cases, the old parents have to dig into their live-saving to help to pay the loan. It is unfair for them to be held responsible for the trouble caused.

Hiew also said, in many cases that he came across were involving heavy gambling, and it is the “Killer” which put many people into deep trouble. Why gamble when you have no money? Many people because of heavy gambling lost their families, milk money, jobs, being chased after by Ah-Long, and some even lost their life.

There are many banners being hung in the KK and Penampang area, and there is no action by the authorities to remove them. These banners are the target of complaints received by the Adun Luyang Office. The banners are hung everyway and the enforcement seemed not going to remove them. It is easy to take action and to advise those people who had hung the banners, because their telephone numbers are printed very big on the banners.

The other annoying thing is that the Ah-Long always put their name cards on to the wing screen and window of the cars, which sometimes can jam the window and the cars owners have to find place to dispose off the cards. A car owner said when he did repair to his car door, he found more then 40 such cards stuffed inside the car doors.

Hiew wants law and order in the city, and we should not be bordered by these unlawful action that worries the people.