FANCY STANDING UP FOR 6 MINUTES BEFORE A MOVIE AT THE CINEMAS? 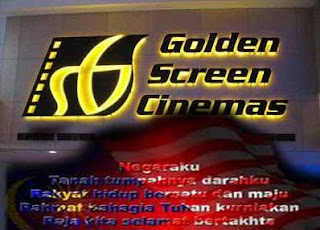 AN OPEN LETTER TO THE EDITOR

Starting next wednesday, a 6 minutes clip comprising of Negaraku and 2 other Merdeka Day songs will be played before any movies in the cinema starts, whether it be GSC, MBO, Cathay, or any other cinemas. Action will be taken against anyone found disrespecting the national anthem. Mind you, disrespecting includes texting, chit chatting, and remaining seated during the 6 minutes.

I can see the government's noble intention. It certainly creates the Merdeka Day mood and atmosphere, but then, how far can patriotism be instilled through this practise? I suggest the government do a research, and be clean and honest with the answer. Take US and England as an example. Why are proud of their flag, their country and their national anthem?

See, in these countries, it's a culture, whether they sing the national anthem or not, they feel proud of their country. You can't force the people to be proud of something they find "not right". 51% of Malaysians who voted for Pakatan Rakyat are sick of the mess in this country. You can't expect these people to be proud of the country after singing the national anthem, considering their despise towards the mess.

Just look at the corruption indexes spearheaded by the police, government officials and ministers. Businesses lose out because of corruption. Corruption becomes the driving force in contracts and tenders, not incentives to improve and compete.  Most high ranking officials in the agencies either don't work, or work slowly when there's no under table money. Government rely on handouts and cash to win elections.

Look at escalating crime rates. Burglars carrying out their activities rampantly. Theft is on the rise. And mind you, this does not only happen to normal civilians, even Ministers, police chiefs, the deputy prime minister, Menteri Besars, and Tan Sris can be robbed.

These high ranking personnels who have CCTVs and security guards at their home are not even spared. Wild wild west shooting style everywhere. There has been at least 8 in the past 2 months. I did not pluck these figures from the sky, these were reported in the news.

Gangsters, businessmen, NGOs and even corporate leaders, you name it. The recently concluded Altantuya case also raised much questions. No answers as to how she entered the country, get shot twice and then get exploded. Tech Beng Hock, under dubious circumstances, court judgement was an open verdict. So how safe do you feel in Malaysia? If it is still hard to comprehend, just try walking through the streets of Sinsuran or Kampung Air at 11pm.

The rising cost of living. Yes this happens everywhere in the world, but that should not be an excuse to allow the continuation of inflation. Statistics by the World Bank showed that Malaysia is one of the leading countries in terms of rising cost of living. Consumers are losing out, because their spending power is becoming weaker and weaker. On on the other hand, government politicians are spending like there is no tomorrow. Millions of ringgits of soft loans are given out as if it were their own pocket money. Corporate and conglomerates with political connections are forever expanding and making billions.

Religious tensions caused by monkey politicians who want to score cheap political points. Where is the religious tolerance that Najib preached to the Arab world? The likes of Ibrahim Ali, forever indispensable to UMNO and untouchable by the authorities despite creating hatred against other religions. So much so for 1Malaysia?

Racism championed by right wing groups and irresponsible parties. Yet again, where is 1Malaysia? 2 bloggers who posted a picture of a pork dish initially denied bail by the court. A politician, who mocked the Indians, got away without being charged. Ibrahim Ali who suggested burning bibles with the Allah word, got away scotch free.

Even the PM himself, blamed his government's loss on the Chinese. The next day, Utusan ran a headline asking "Apa lagi Cina Mahu?" Teachers asking students to go back to China or India. What happened to these perpetrators? Where is the consistency in the charges and disciplinary actions?

Flip flop education policies by the forever problematic education ministers. They say youths are the future of the nation, and yes I agree. Parents are responsible at home, whereas at school, the education system plays an important and fundamental role in shaping tomorrow's society.

Few years back we witnessed a U-turn decision with regards to the teaching of science and maths. Much resources were invested in preparing English to be used as the medium for teaching science and maths, few years later, the policy was abolished.

From what many critics see, the respective minister, in order to gain political mileage, is suggesting that he is prepared to use students and teachers as his political pawns. Now, we see them trying to make Islamic civilisation a compulsory subject for University students.

The worst part is, Merdeka is around the corner, yet many still disregard the fact that Malaysia is 50 years old, and not 56 years old. Even politicians from both ends cannot decide where do they stand and try to avoid making a stand. History tells you that Malaya gained independence in 1957, whereas Sabah and Sarawak agreed to join Malaya to form Malaysia in 1963. So Malaysia is in fact 50 years old, unless your definition of Malaysia does not include the two resource rich states East Malaysian states. You cannot change history, can you?

So tell me, will singing the national anthem solve all these problems? Yes, I will stand for the six minutes because I love my country, but I wish that as I stand and sing, I can be proud of what my country has achieved. I want to feel proud of the country, the system, and achievements other countries do not have. But will that happen in the near future? As I have always shared with my friends, at this point in time, "I love my country, but not the system".

-Adrian Lim Chee En is currently a first year law student based in Kuala Lumpur. He takes an interest in issues concerning the country and loves food photography. Despite being far from his hometown Sabah, his love for the state has never withered. He dreams of seeing Sabah be on equal footing as West Malaysia, and hopes to see Malaysians progressing and coming together as one without being divided by race and religion.(The Author opinion is not on behalf of Sabahkini.net view's.)
Posted by sabahkini.net at 00:58