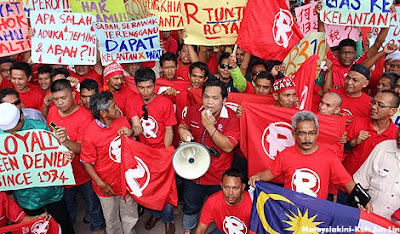 THE 5% petroleum royalty money receivable by Sabah at the moment is actually minimal in terms of the huge amount of money needed to be utilized and injected into uplifting the economy and financial system to enhance a vibrant growth in Sabah.

For the past 5 years from 2008 to 2012, Sabah received RM4,093 millions, Sarawak RM10,413 millions and Terengganu RM11,623 millions (refer to table attached). This reflects that in Sabah we are not that well off, due to the limited and small amount of royalty money received from the petroleum production, even though this amount constituted one quarter of the total state income and revenue.

This explained why Pakatan Rakyat is insisting and pressing hard for a 20% petroleum royalty or sharing to be give to Sabahan.  If this 20% sharing is implemented, this means there will be a substantial increase in the state revenue from merely RM941 millions in 2012 to RM4,000 millions when Pakatan Rakyat takes over the government after the 13th general election (PRU13).

It is quite definite that with the huge increase in the petroleum royalty money, the development in Sabah will speed up by many folds and the economy growth will be enhanced to a very high level. The past many years of slacking behind when compared with Semananjong can be solved undoubtedly. The most important is that the people's problems can be resolved eventually.

The Sabah DAP KKMP Hiew King Cheu sees this as an golden opportunity for the Sabahan to break away from poverty, lack of development, slack economy, and to replace with a brighter future. The BN government had in the past 50 years deprived the Sabahan from enjoying their own rights and gains from the petroleum, and it is time to ditch them and allow to be replaced by PR.

It is because the general election is near, the BN started to talk about setting up a special committee to "look" into the matter. Are they genuine, or they just want to do something to make the people to believe that they will get more for the Sabahan? We really want to see them "walk the talk" and not just for the sake of "say say" only.

The ball is now in the hands of the Sabah voters, and it is them who will have to decide whether they will get the RM4.0 billions (20%) from  the Pakatan Rakyat or they are happy with the RM1.0 billion (5%) from BN.

The voters surely had made up their mind on who to vote for, therefore in the PRU13, just concentrate your vote without splitting any votes to allow Pakatan Rakyat to form the new government. Then you will see the real difference. (DAP Media)
Posted by sabahkini.net at 01:38