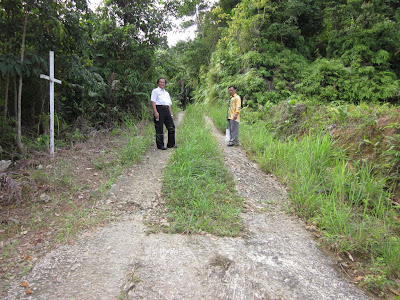 SABAH DAP Vice Chairman, Edward Ewol Mujie has received complaint from the people of Kg. Togung in Menggetal on the Jalan Togung Nuluh that leads to their kampong has not been maintained or repaired, although some BN leader had visited the area and promised to them that the said road will be repaired but until now nothing has been done.

Edward said when he and Andrew Lee, Stephen Yaman and Hubert Charles Barry visited the said kampong recently, they noted that the road is a steep road and going uphill, and the people complained that their vehicles have been damaged many times because of the bad road surface.

The people said that wherever if rain it would be very difficult for them to drive up as will be very slippery so they have to leave their vehicles in the open space in front of a chapel at the foot of the hill and walk up to their respective houses.   They felt very disappointed with the BN government for not keeping its promises to repair and upgrade the said road.

Edward urges the authorities to repair and upgrade the said road for the convenience of the people staying in the kampong. (DAP Media)
Posted by sabahkini.net at 10:12