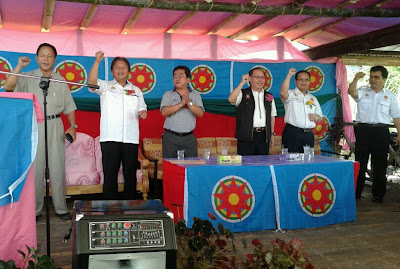 “We are sure that the entry and support of the 2 ex-Upko, PBRS stalwarts, Patrick Paunil, the ex-Upko Division Secretary, and John Bague, another heavyweight from PBRS, and their supporters will not only further strengthen STAR in Tambunan but will also cause a further dent and reduce the support of Barisan Nasional in Tambunan” stated Datuk Dr. Jeffrey  Kitingan, STAR Sabah Chief, in a press statement.

“Sabah BN leaders should emulate the both of you and take up the challenge to fight for the restoration of Sabah’s rights and autonomy and to stop the colonization and further damage to Sabah” said Dr. Jeffrey in welcoming the 2 ex-Upko and PBRS stalwarts and their supporters at the launching of STAR’s Timbou Polling District election machinery in Tambunan, earlier this week.

However, it is not their support of STAR that is important. What is more important is that their departure from BN and support of STAR shows that Sabah leaders are beginning to accept the reality that the continued control of Sabah and the unfair treatment of Sabah as well as the marginalization of the local natives need to be stopped with a change of the existing BN state governments.

In the true spirit of Sabah rights and autonomy in a true Malaysia federation, the time has arrived for all Sabahans to stand up and unite and remove the BN state government and take charge of their future destiny.
Posted by sabahkini.net at 12:40