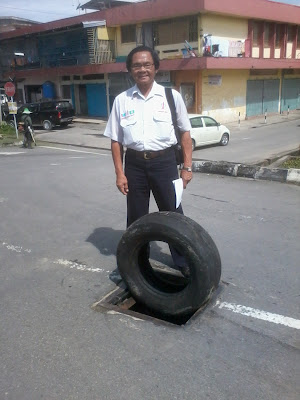 THE IRON GRILL has been stolen from the drain in the middle of Lorong Senergy Square 1 in Telipok said Sabah DAP Vice Chairman Edward Ewol Mujie.

He said that the people there placed a used tyre on the drain hole so that the road users are aware of the danger of falling into it.

Edward said that the people informed him that iron grill cover of the drain had been stolen many times and every time after the DBKK replaced the grill, it is being stolen again. The people hope that DBKK can find a better way of replacing the cover by fixing something permanent or even use a concrete cover on the drain so that it could not be easily removed Edward said.

In the areas in charged by DBKK, many metal grills and cast iron manhole covers have been stolen by metal thefts, and it looks that there is not enough enforcement taken. The other is that all scrap metal dealers are still buying stolen metal items from the roads. There must be some immediate solution and action on this long outstanding problem. (DAP Media)
Posted by sabahkini.net at 11:17