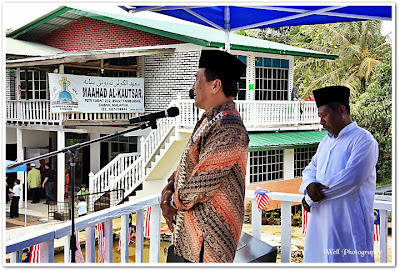 KOTA KINABALU: Yayasan Islam Sabah has lodged a police report against Dr Chong Eng Leong for claiming that hundreds of thousands of illegals were given identity cards and registered as voters in Sabah.

Its Secretary General OKK Haji Yahya Ahmad Shah, who lodged the report, said Dr Chong has also claimed that these new so-called voters could determine which party and people would rule Sabah.

"This statement is serious and provoking. The police should investigate and if found to be not true Dr Chong should be charged," he said in a statement, Wednesday. Chong, a former Senator, is now with the opposition PKR.

Yahya also reported to the police on the statement made by Amanah Sec-Gen Ramli Akim that a woman was given identity card under a so-called "Project IC Dr Mahathir". Yayasan Islam Sabah contended that there is no such "Project IC Mahathir".

"The claim made by Mahathir that some of the refugees were accorded citizenships based on the Federal Constitution and also in accordance with the Federal Government policy on citizenship to refugees which was announced in early 1970s by the late and first Prime Minister Tunku Abdul Rahman Putra Alhaj," he said.

Yayasan Islam Sabah appealed to those making "provoking and false statements" to stop and leave it to the Royal Commission of Inquiry, which is well represented to carry out its task and make its report of recommendation.

"In case you have any substantiated claims you may bring them before the Royal Commission of Inquiry," he said. (DE)