CAN MCA DELIVER FOR NAJIB? 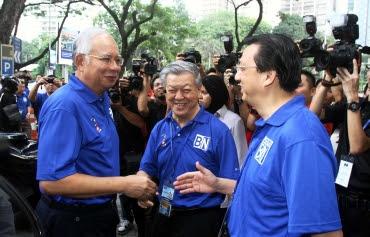 FRUSTRATED ....Is Najib lashing out at DAP because he's frustrated with MCA's inability to sustain Chinese support?

WHY should any self-respecting Malay support Umno which stands idly by and endorses a party like the MCA? MCA can no longer sustain Chinese support and Umno is absolutely disabled to help.

So it has come to this because all this while Umno has turned MCA into a party of honorary Malays. Now Umno reaps what it has sown.

But people are not buying whatever you say now, Mr PM.

Najib says Malays are fed up with DAP. Well, let me tell you this. Those who know Najib well, knows he is playing to the gallery.

He is acutely aware that he is speaking among political rejects. MCA’s influence over its ethnic group is fast diminishing.

Its claim that it’s regaining legitimacy among the Chinese sounds so phony and laughable.

MCA knows it can only deliver at best three parliamentary seats in the coming general election. The party has been reduced to the status of a neutered Chihuahua.

We will humour both Najib and his sleeping partner, MCA.

Now why should the Malays be fed up? DAP, after all, has always contested in areas where MCA candidates stand.

In which case DAP poses no threat to Umno. So, could it be that Najib is really and actually fed up with MCA for being completely impotent at winning over the Chinese?

MCA bends over and does the unthinkable – it articulates issues that alienate them further from Malay votes while at the same time, places Malaysian Chinese as seemingly natural enemies to Malays.

That is a position which all right-thinking Malaysian Chinese must refuse. They cannot ride on the irresponsible and xenophobic new approach of MCA.

MCA’s direct and scornful diatribes against Islam are tolerable while less intense technical opposition from DAP is taken as virulent and insidious assault on Muslims.

When the MCA says that hudud, which is currently a non-issue, could have been implemented a long time ago had Umno wished to but has not – that means that Umno, a Muslim party does not support Islamic laws.

The fact is Umno and its leaders mock Islam. They know if hudud is implemented, this country will be in a mess.

We wouldn’t have enough stone pebbles to stone offenders. (FMT)
Posted by sabahkini.net at 10:52