PKR GOVT CAN BE TRUSTED 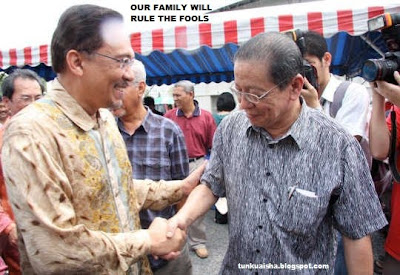 KOTA KINABALU: Key issues that have plagued Sabah for decades such as its illegal immigrants (PTI), corruption and poverty have not been addressed and can only be addressed if the present central government is replaced, said DAP national advisor Lim Kit Siang.

The issues had not been addressed in Sabah despite the changes in governments that had taken place in Sabah in the past because the central or federal government did not undergo any changes, he said during an event held in conjunction with DAP Sabah ‘Kebangkitan Rakyat Sabah’ at SM Kian Kok near here, yesterday.

“To save Sabah, we must save Malaysia – to do that, we need to be united and change the government at the federal level as well as at the Sabah level,” he said.

Lim said their aim in the upcoming 13th general election was to change in the present government and to make Datuk Seri Anwar Ibrahim as the seventh prime minister of the country.

He said the PKR government was a government that could be trusted by the people.

In his speech, Lim also asserted that the people throughout the country – from Peninsular Malaysia, to the Dayaks in Sarawak and the Kadazandusun people in Sabah — were calling for change to occur in the country’s administration.

“If we can garner one third of the seats in Sabah, we will be able to form the government that can be trusted and leaders who hold on to the peoples’ trust,” he said. (BP)