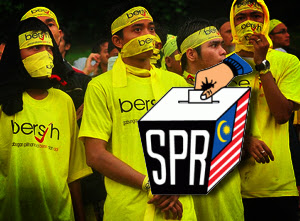 PETALING JAYA: Polls watchdog Bersih today expressed its appreciation to the Election Commission (EC) for its initiatives to discuss with members of parliament the existing inconsistencies in the electoral roll.

“We are pleased that the EC is having open discussions with the MPs and hope that this process continues regularly,” it said in a statement today.

It also lauded the commission’s move to set up a special unit to rid the voter roll of dubious entries.

It further hoped that the special unit would be set up after the EC consults various stakeholders and took into consideration the feedback from various electoral reforms groups.

Bersih also urged the EC to publish frequent updates on the progress of this unit to ensure that the public is thoroughly informed, ahead of the elections.

With regard to the new regulations concerning overseas voters, Bersih expressed its view that the EC should resolve the issue before the end of the current parliamentary session next Thursday.

The coalition of NGOs for fair and free elections, however, reiterated its objection to the condition set by the EC for overseas voters to return to Malaysia at least once every five years.

EC deputy chairman Wan Ahmad Wan Omar had reportedly said that the condition was so that the voters must show their loyalty to the country and for them to be well-informed about the country’s political course.

But Bersih objected to this “condition” stating that it “is unfair”.

“Such a ruling cannot be forced on voters merely based on the EC’s assumption that a Malaysian who lives abroad does not keep abreast with national politics,” Bersih said in its statement.

Bersih was also of the opinion that the EC is going in the right direction.

“We view the latest moves by the EC as a step in the right direction, but only if the commission carries out these actions with the clear aim of ensuring free and fair elections for all Malaysians,” it said. (FMT)