EXPULSION WILL NOT AFFECT UMNO 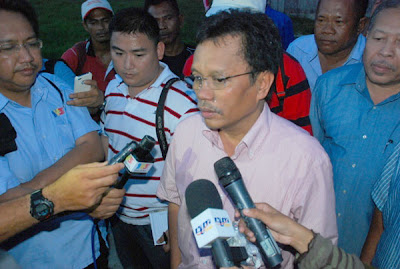 NOT AFFECTED.....Shafie in the interview session.

SEMPORNA: Umno Vice President, Datuk Seri Hj Mohd Shafie Hj Apdal said the expulsion of two Semporna Umno members and a three-year suspension on another member for sabotaging the party would not affect the strength of the party but drive the party forward in the coming general election.

Shafie, who is also Minister of Rural and Regional Development, said the decision made by Umno Disciplinary Board was based on relevant proofs and would not affect Umno.

He told the media this after meeting with residents at Pusat Pembangunan Minda Insan on Tandoan Island here, yesterday.

“It was a good disciplinary action but I believe some members will still sabotage the party.

“It is important for us to continuously work hard  in order to gain the people’s confidence towards Umno,” he said. (BP)
Posted by sabahkini.net at 13:16