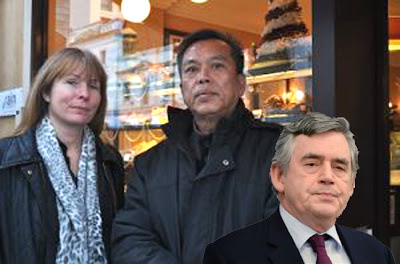 SPUR .....An activist believes a visit by UN envoy, Gordon Brown, would help spur educational development in Sabah and Sarawak.

LONDON:  Has the prevailing failures of the federal government in providing equal attention to Sabah’s needs finally caught the  attention of British officialdom? It is a known fact in Sabah, that both activists and opposition politicians have been seeking British government’s support on many issues.

The NGO United Borneo Front has been at the forefront pushing for the reinstatement of the 20-points Malaysia Agreement and Sabah’s right to be treated as nation-partner.

Despite 47 years under Barisan Nasional, oil rich Sabah has remained poor. Last year the World Bank REport noted that Sabah was the poorest state in Malaysia.
Federal government policies and its BN stooges in Sabah have been blamed for this.

It therefore comes as no surprise that former British Prime Minister Gordon Brown, now the United Nation’s global education envoy, may visit Borneo to learn first hand the issues that may be affecting natives’ access to quality education.

Once known as North Borneo and directly under British rule, Sabah  saw the visit of  Duke and Duchess of Cambridge, Prince William and Kate Middleton in September. The royal couple visited the Danum Valley, where UK Royal Society’s South East Asia Rainforest Research Programme (SEARRP) has been carrying out a variety of conservation programmes since 1984.

Brown, is expected to visit Borneo – Sabah and Sarawak – to learn first hand the issues that may be affecting natives’ access to quality education.

He is expected to make the visit “as soon as he has adequate justification”.

The condition of schools on the island, especially in Sabah and Sarawak and in all four Indonesian territories in Kalimantan, have been brought to the UN’s attention by NGOs and individuals who have noted that Bornean children, particularly the natives, are being neglected at various levels.

Sabah political activist, Daniel John Jambun, who is in London canvassing support for Borneo causes, said he learned of this new development from friends here including from the Borneo’s ardent advocate, Clare Rewcastle, whom he met here.

Jambun, who is also chairman of UK-based Borneo’s Plight in Malaysia, told FMT that Brown’s visit could take place “as soon as he has adequate justification” to check the progress of education in Borneo.

“There are real issues in Borneo in education, religion, environment as well as human rights. The international community and the UN should look into this and help or else we will end up forever in backwater of the whole region.

In fact on many fronts we in Sabah and Sarawak are worse than when we were still under British protection. Now the Borneo’s natives are boiling for change,” said Jambun who is also State Reform Party’s (Star) Sabah deputy chairman.

Brown, the former British premier, was appointed to the unpaid role by UN secretary general Ban Ki-moon in July, to help “galvanise support” for the UN’s global education scheme, which aims to give every child access to quality teaching.

He accompanied Ban Ki-moon on recent visit to Asia, where he said he hoped to emulate the successes of Kofi Annan, the former UN Secretary General and former US President Bill Clinton, as special UN envoys for Syria and Haiti respectively.

“Ensuring that every child in the world has the opportunity to go to school and to learn is a longstanding passion of mine. Education breaks the cycle of poverty and unlocks better health and better job prospects,” he said.

Jambun said he felt a visit by Brown would help spur educational development in Sabah and Sarawak.

“Some native schoolchildren are still forced to walk for hours in jungles just to reach their schools. This should not be the case anymore, but it still is the reality in Borneo,” he said.

“Many of the schools in rural Sabah and Sarawak are dilapidated and in shocking condition,” Jambun said, adding that this could be seen even in areas near the city Inanam and Penampang.

“In some areas in Sabah and Sarawak there is no school whatsoever. The federation leaders way of thinking must change when it comes to Borneo.

“This land is very vast and settlements are scattered, the authority should not simply take the Malayan’s model for us,” he added. (FMT)