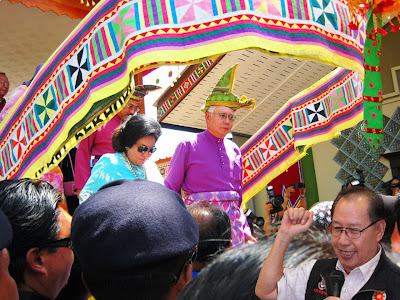 KOTA BELUD : Opposition State Reform Party (STAR) has penetrated Umno’s bastion in the state – the Iranun and Bajau kampungs – which incidentally is the birthplace of Sabah Umno.

STAR’s Sabah Chairman, Jeffrey Kitingan, was elated to see about 150 senior citizens and the young who thronged to his ice-breaking “ceramah” at two kampungs here recently.

One session was held in Tempasuk Tamau, an Iranun kampung, not very far from Umno’s Pandikar Amin Mulia’s home. The ceramah was hosted by a local ustaz who recently joined STAR.

The other function, attended by some 170 individuals, was in Usukan’s Lebak Moyoh at the residence of a local Umno leader and well-known Bajau political activist, Ridzuan Sikah.

Ridzuan’s entry into STAR is a signal that Umno in Kota Belud is not invincible and that change is coming.

In fact, in the last 2008 general election, through manipulations by local political warlords, Umno did lose votes in some of the Muslim kampungs in this district, especially in Iranun areas.

At that time, Kota Belud’s Umno members were humiliated when the party chose outsider Abdul Rahman Dahlan, who is from adjacent Tuaran, to contest under the Barisan Nasional banner, dropping popular Salleh Said Keruak.

The decision was seen as discrediting a pool of many local talents.

Abdul Rahman went on to win Kota Belud parliamentary seat, nevertheless, but with a much reduced majority as compared with his predecessor Salleh who won the seat for Umno in the 2004 general election.

Salleh, in a three-cornered fight, then retained Kota Belud with a thumping 10,227 vote majority. Abdul Rahman in 2008 won it in a straight fight with a PKR candidate, Saidil Simoi, but with only a 3,020 majority.

According to Umno insiders, disgruntled party leaders and members in Kota Belud are still licking their wounds from the humiliation and their angst will resurface and be magnified if again the incumbent, an “outsider”, is retained at the coming polls.

And, STAR is cashing on the still disgruntled local community. Its Tempasuk coordinator, Suwah Buleh, is a personal friend of the young ustaz who is affectionate to many people.

According to local observers, Suwah is gaining ground there already. STAR flags have begun coming up much to the frustration of Umno local leaders.

Businessman Suwah, who is active in his SIB church, is poised to be STAR candidate for mixed-seat Tempasuk. He is set to attract the bulk of the votes from the Dusun community.

Coupled with this are pockets of growing support in the Iranun and Bajau areas.

Observers believe that Suwah is likely to scrap through at the polls which could be called anytime soon.

With Umno’s candidate also certain to be a Muslim, this, according to the locals, would split the Muslim votes thus paving the way for Suwah to win.

The last time a Dusun Christian won Tempasuk was during the era of Parti Bersatu Sabah (PBS) (1985-1994). The same goes for the Kota Belud parliamentary seat when the late Maidom Pansai was with PBS.

Meanwhile, Ridzuan from Usukan may be aiming to be STAR’s candidate in Usukan, an overwhelmingly Muslim seat. According to observers, it would be a tough fight for any contender there, especially if Salleh is given the chance to stand again in Usukan, his family fort for ages.

Another state seat under Kota Belud is Kadamaian, currently held by PBS-BN, where many parties including STAR, PKR and Sabah Progressive Party (SAPP) are keen to contest. (FMT)
Posted by sabahkini.net at 12:07